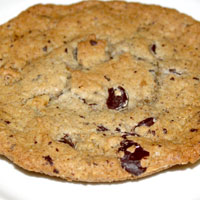 I grew up hearing about home cooks who revered the “Mrs. Fields” cookie recipe. Unlike other recipes, people were reluctant to pass this one along. Sure, they’d make you cookies with the recipe – but giving out the secret? Remember, these were the days before you could instantly access thousands of recipes online. So this one stayed a bit under the radar – for a while.

And then the secret got out: Oatmeal! It was pulverized oatmeal added into the flour and grated chocolate that made the Mrs. Fields recipe so chewy, toothsome and unique. Then everybody started making the Mrs. Fields cookie recipe. Of course, the Mrs. Fields Recipe Book followed, and then all the secrets were out.

So just how do you improve a recipe like that? Well, my thought is you have to go with your own tastes and preferences. So, for me, I tossed coconut into the mix. Coconut also adds a chewiness to the cookies that you might not even pick out if you didn’t know it was in the recipe. So, before I start pulsing my oatmeal, I add some coconut first (if I have time, I even toast it briefly in a dry saute pan for a couple minutes over medium-high heat). Then, once the coconut is in smaller pieces, I add the oatmeal and then pulse them together until they become fine – and voila! You’ve got coconut-oatmeal flour.

A few other steps I tweaked to make the recipe a little easier? I trimmed it in half (I like cookies but I better not be eating too many of them!) – and I threw out the whole “grated chocolate” method. Grating chocolate takes too much time, especially when you can just pulse it in the same bowl as your oatmeal and get it done much, much faster – and without shredding your fingertips.