A T. rex Named Sue at the Michigan Science Center in Detroit 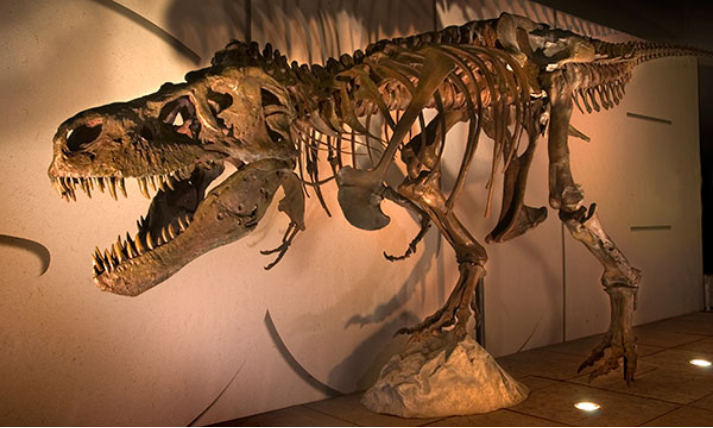 Sue isn’t your average excavated dinosaur skeleton. Unlike her unearthed counterparts, she’s 90 percent puzzled back together, and a Sue replica (the original is on permanent display at The Field Museum in Chicago) arrives at the Michigan Science Center, Oct. 17-Dec. 31, 2015. But Sue’s skeleton is only the tip of the iceberg at this immersive temporary exhibit, A T. rex Named Sue, which explores dinosaur fact, speculation and excavation.

“At 42 feet long and 12 feet high at the hips, Sue is the largest, most complete, and best-preserved Tyrannosaurus rex ever discovered!” reads the Michigan Science Center’s website. The life-sized cast serves as the anchor for this exhibition held in the center’s ITC Gallery.

This dinosaur’s skeleton is named after Sue Hendrickson, a paleontologist who discovered the bones near Faith, South Dakota in 1990. It took the team more than two weeks to dig up more than 250 bones and teeth that makeup Sue’s skeleton, which has contributed to what we know about the biological makeup, growth and behavior of the T. rex.

Take the family to learn all the intricacies of the T. rex. Begin with the towering replica that casts a shadow against an illustrative backdrop. Make your way to the separate cast of Sue’s skull to get eye-to-eye with the beast – and try not to squirm when she growls and roars. Don’t neglect the surrounding reading rails that feature touchable casts of Sue’s arm, tail, rib bones and teeth.

Get familiar with Sue before you tackle the exhibit’s interactivities that allow visitors to interpret T. rex anomalies and diagnose pathologies, see like a T. rex or a Triceratops, use a dinosaur’s keen sense of smell to snoop for food, feel how Sue moved her arms and how her jaws chomped down on prey. You can even maneuver pieces from a “bone bank” to construct a 3D image of the giant reptile’s skeleton.

Take a break from hands-on exploration to view two onsite exhibition videos that depict how our perceptions of dinosaurs have evolved with new discoveries, and how scientists used CT scans of Sue’s skull to learn what went on inside that thick skull.

To learn more about A T. rex Named Sue at the Michigan Science Center in Detroit, visit the Metro Parent calendar.