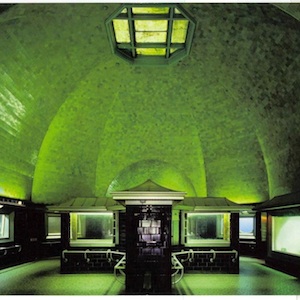 OK, so maybe you can't literally delve deep underwater. But you can catch the sight of some fascinating finned creatures populating the tanks of the Belle Isle Aquarium on Belle Isle in Detroit.

The tanks will be filled with Giant Gourami, catfish, eels, turtles, frogs and local species of fish, says Vance Patrick of the Belle Isle Conservancy. There will even be six of seven species of Garfish at the aquarium, making it the only place in the United States where you can see that many in one tank, Patrick says.

Check out our article on family fun activities to do on Belle Isle, too!

Some of the aquarium's 60 tanks aren't filled with fish. Rather, they're teeming with local art and photography, Patrick says.

Patrick, who first became involved with the Belle Isle Aquarium as a volunteer with the Friends of Belle Isle in 2005, said he has been a "driving force" to get the aquarium open again because he grew up going there and wanted it reopened for all kids – including his own.

The 108-year-old aquarium was designed by Albert Kahn and was "the oldest continually-operating aquarium in North America" when it closed, according to the Belle Isle Conservancy website.

Parking is free, and cameras are welcome in the aquarium, the Belle Isle Conservancy notes in a press release. Patrick says the aquarium has stroller and wheelchair access, and there will be games, sidewalk chalk and more for the kids on opening day.

There are many reasons families should visit the aquarium and Belle Isle, Patrick says, adding that the island is a place to spend time with kids – and do so for free!

Why not check out the other features and attractions the island has to offer while you're visiting? Patrick recommends the Belle Isle Nature Zoo at the east end of the island, the Anna Scripps Whitcomb Conservatory or the Dossin Great Lakes Museum.

Note: Because there are no concession stands on the island, the Belle Isle Conservancy encourages visitors to bring their own food and drinks.

For more information on the Sept. 15 grand opening – and what's going on at the aquarium – visit the Belle Isle Aquarium Facebook page.

See the Metro Parent listing for the 2012 reopening of the Belle Isle Aquarium in Detroit for more information.