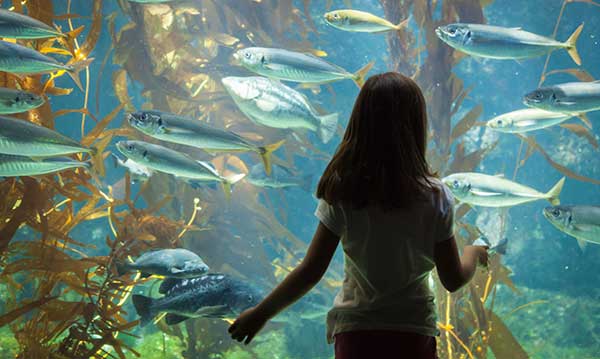 In a state surrounded by huge lakes, many Michigan kids could tell you the difference between a snapping turtle or box turtle or point out bass and catfish during summer fishing trips. But when was the last time they touched a sea urchin?

With the nearest ocean hours away, taking a visit to one of the local aquariums can be especially enlightening for kids in southeast Michigan. At the SEA LIFE Michigan Aquarium and Detroit’s Belle Isle Aquarium, which reopened in 2012, there’s plenty to see under the sea – right in our backyards.

Beyond the obvious “wow” factor kids experience when they see a shark or a stingray up close, an aquarium visit can also translate into a desire to take better care of the world.

“To come face to face with it, it develops a love and an awareness for the world around us,” Gibb says. “We want kids to see and explore and get excited about all the amazing creatures here and also realize that it takes a lot of effort to keep the oceans a healthy environment for sea creatures. We want them to build an awareness around that and realize that we all have a part to play.”

SEA LIFE opened at Great Lakes Crossing in late January and has seen an “overwhelming” response from the community so far, Gibb says. “People are so excited to have a place like this where they can bring their kids and families. It’s been really wonderful.”

At Detroit’s Belle Isle Aquarium, open on 10 a.m.-4 p.m. Fridays, Saturdays and Sundays year-round, some spring weekends have brought in as many as 2,000 people including many families, says volunteer Carol White. A free education program “Science Saturday” is usually offered from noon until 2 p.m. the second Saturday of the month.

“It’s a good educational experience for kids,” White says of an aquarium visit. “They’re seeing things that they might not otherwise see.”

Here’s a look at eight of the coolest aquarium attractions for kids at these two popular places.

1. Touch pool. At SEA LIFE aquarium, kids have the chance to touch a sea star, an urchin or a shrimp in the popular Touch Pool. Kids usually get a kick out of the cleaning shrimp in the pool. “If you put your hand in there, they come and clean your fingers,” Gibb says. Staff is on hand to teach kids about what they are seeing. The experience is included in regular SEA LIFE admission.

2. Ocean tunnel. Children love spending time in the 180-degree ocean tunnel at SEA LIFE where they will be surrounded by water and watch as sharks, stingrays and hundreds of fish swim overhead inside the 120,000 gallon tank.

3. Kid-sized features. Throughout SEA LIFE Michigan Aquarium, you’ll find tanks that start at kid-height and tons of other kid-friendly features. One fish tank lets kids pop up and get the feeling they’re inside the tank while other small bubble windows are perfect for climbing inside for a better view.

4. Stingray Bay. Kids can walk all the way around this clear acrylic tank and get face to face with cownose stingrays, southern rays and Atlantic rays. “(The stingrays) come up to the sides of the tank with their underbelly and they just look like they’re smiling at you,” Gibb says. “You’re nose to nose with them.”

5. Giant octopus. Ursula, the giant Pacific octopus at SEA LIFE is a big hit with kids. “She’s just amazing,” Gibb says. “She hides a lot so you gotta be really lucky. It’s fun for the kids to come and spy her. She’s a master of camouflage.” Kids are always fascinated to learn that the octopus has three hearts and blue blood, Gibb says.

6. Freshwater puffer. At Detroit’s Belle Isle Aquarium, this special fish always gets oohs and ahhs from young visitors. The puffer fish has beautiful patterns, White says, and “puffs up like a big balloon” when he’s excited or frightened. “He’s never puffed for the visitors, which is probably a good thing,” she says. “Everybody really likes him.”

7. Sea horses and electric eels. Kids always love visiting the sea horses at the Belle Isle Aquarium, White says. “They have a cool area,” she says. The electric eels – freshwater fish that can use pulses of electricity to kill prey – are also a popular attraction.

August Fairs and Festivals in Metro Detroit and Ann Arbor

Summer is on its way out, but there's still tons of fun to be had in August 2022! Visit one or more of these great August fairs and festivals in metro Detroit and Ann Arbor.
Read more
Attractions

Family Days at Local Museums and Other Attractions

There's no better time to visit local museum, park or other attraction than on kids' day!
Read more
Guides