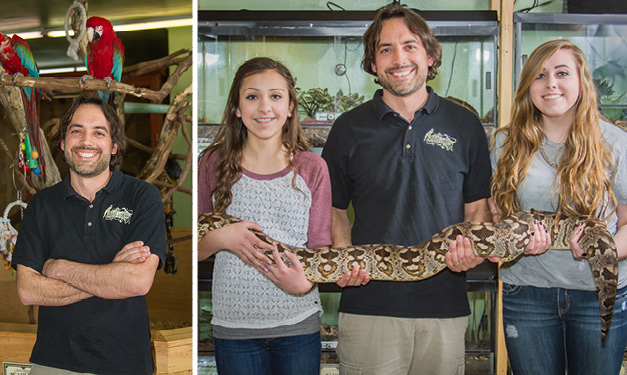 When John Lebert was little, his mom took him to his first pet store to buy hermit crabs. But this kid wasn’t interested in the crustaceans.

“I gravitated toward lizards,” Lebert says. “I can’t explain it. I was totally hooked with a green iguana.”

Lebert’s affinity for animals, particularly exotic reptiles and birds, turned into a high school job at an Ann Arbor pet store. That career choice would lead him to own a pair of pet stores himself and, eventually, become curator of the now-closed Great Lakes Zoological Society’s World of Discovery Reptile Zoo on Ann Arbor’s west side.

In fact, Lebert, who’s worked at pet shops all around the area, is known as an unofficial guru for all things reptilian. It’s even how he found his wife, Bethany.

“We actually met because she had a pet lizard and was referred to me,” says Lebert. She was 21 and he was 19. “She worked in a pet store that I used to work in. Funny enough, our paths had crossed earlier, but we never knew it.”

The love was mutual. A year later, in 1994, the couple purchased Pets ‘N’ Things in Saline, a store they still own and manage. They’d later buy The Pet Emporium in Ann Arbor, too. Lebert jokes they did things backwards: went into business with each other, bought a house, got married, had kids. Their daughters, Evelyn, 15, and Isabelle, 13, often pitch in with the business.

“My youngest has had reptile pets. But her life has become busier and she just recently gave up her tortoises,” Lebert says. “My oldest daughter, Evelyn, helps out with the pet shop. She enjoys the animals. But it’s either a passion you have or don’t. The focus for her isn’t on reptiles. My youngest really enjoys the reptiles.”

At their stores, the family sells only captive-born birds, reptiles and small animals – many bred in their facilities. Lebert says he could’ve made a lot of money with alligators and large pythons and tortoises. But for him, it’s not about profit.

“We try and take responsibility for the sale of our animals,” Lebert says. “We make sure we can take them back if the person couldn’t take care of it. I don’t want to sound preachy, but I wish more sellers would think like this.”

That mindset is part of the reason he was tapped as curator, he explains.

At the zoo, his work showed him firsthand how a lot of pet owners get in over their heads. It wasn’t uncommon to have the Washtenaw County Sheriff’s Office stop by with an abandoned reptile or amphibian. The hardest part, he says, was when they had to turn away animals.

“As an organization, we’re not opposed to anyone having pet reptiles. But the key is making the right choices,” Lebert says. A big problem is planning for how big critters can grow. “A lot of times, people don’t understand about making custom-made enclosures. And it gets expensive to heat these animals. The electricity costs a lot.”

That’s actually why the GLZS, which unfortunately closed permanently in early 2015, existed. Mark and Jane Creswell founded the zoo’s parent nonprofit in 2008, after the local couple discovered how many reptile and amphibian pets were surrendered or improperly cared for.

After tending to many of them, the Creswells opened the World of Discovery Reptile Zoo in 2011. The 5,000-square-foot exhibit space was home to over 100 animals including reptiles, amphibians, birds, insects and arachnids.

The goal was to educate the community by promoting conservation and coexisting with wildlife – while serving as a rescue and rehabilitation center for reptiles and amphibians.

The Creswells’ mission resonated with Lebert. On a daily basis, he taught kids and adults about a variety of animals like boas, pythons, salamanders, frogs, turtles, lizards, parrots and cockatoos.

“The response we’ve been getting is wonderful,” he said in spring of 2014. “We’re so used to seeing things on TV and computers, but I think what really clicks for a lot of younger people is when we bring animals out so they can touch them.

“I think that’s where the real connection is made; hands-on contact. We can talk about how the rainforest is being destroyed. But to put a face to what is being lost has much more of an impact.”

As you might suspect, not everyone was thrilled to see these scaly, slithering, sometimes-slimy creatures. But it was a challenge Lebert took on with gusto.

“I think a lot of people don’t understand reptiles – especially snakes,” he says. “We get adults who are fearful and don’t want to touch them. But then they see their grandchildren or children touch them, and they’re fearless. It’s rewarding to see them get over their fear.”

Note: This story originally appeared in the May 2014 print edition of Metro Parent.