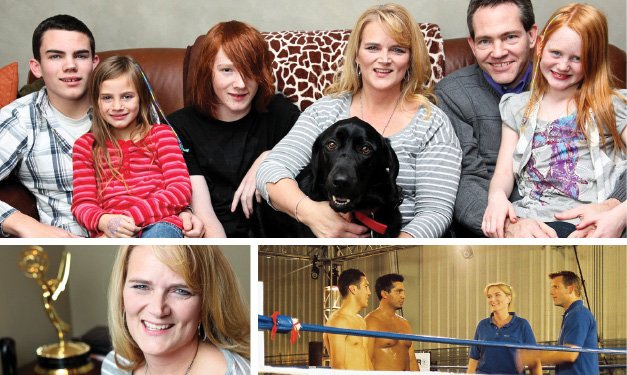 In Cynthia Bir’s living room, by a family photo and clock, something glitzy sticks out.

“I never thought I would have an Emmy on my mantle,” she admits. Yup: “That’s where she lives!” How’d the golden girl land in her Plymouth home? You might say it was a game well played: Bir won for her research work on the ESPN series Sport Science. She’s also brushed elbows with powerful athletes on the History Channel’s Stan Lee’s Superhumans and even a Dancing with the Stars episode.

But it’s not all showbiz for this down-to-earth mom of four, who’s also a full-time biomedical engineering professor and researcher at Wayne State University. In fact, her Detroit employer gets a plug in all her national spots – one of her only caveats.

That gig is what launched her whirlwind TV science adventure, after all, where she’s analyzed the strength of star football players and martial arts masters alike.

It all began with safety gear for boxers, part of Bir’s research at WSU. Out of the blue, the producers of Fight Science, a National Geographic Channel program, called and asked for her expertise on a related subject. She gave it a go.

A couple years later, Sport Science came knocking. Turns out Bir, who quips that she played the mom in Cheaper by the Dozen back in high school, was a natural. While most of her work is done behind-the-scenes, her moments in the limelight were a hit.

“It’s kind of weird,” she admits. “I think engineers and scientists in general a lot of times are very introverted, in terms of their personality. And I’m not.”

Growing up in Sturgis, Mich., Bir had a strong interest in math and science: “I was more of a geek.” She got her first microscope early. Her grandma, a nurse, inspired her bachelor’s degree. But it was husband David – also an engineer, and her high-school sweetheart – who encouraged her to pursue her passion for biomed.

When she started her master’s at the University of Michigan, they had two sons.

“Everybody said, ‘They’re so young,” she recalls. “I said, ‘It’s just going to get worse.’ Their schedules got crazier.” So, before the two younger girls were born, Bir also managed to get a Ph.D. – the first WSU student to do so in that field.

Make no mistake: Bir’s schedule is demanding, too. This month, for instance, she’ll be flying to Vegas or Cali to film another show (production can span weeks – and, in a year’s time, she hit her 120,000-mile mark with Delta). A German au pair helps out, and the family recently took a no-electric-devices vacation (a Blackberry or Kindle is usually in easy reach).

“It’s a passion,” she says of her job, “but it’s also a workload.” That includes loads of grants and academic papers at WSU. But this trench labor also yields the biggest “awards.”

“I can see how it applies day-to-day,” Bir says. Like a landmine-detecting device she helped create for military Humvees. “I know we’re making a difference.”

The hectic lifestyle has helped her parent, too. Bir lets go if the house isn’t totally clean or a younger kid insists on getting dressed solo. But this sports-injury expert never skimps on safety: Protective gear is a must for all her kids’ athletic activities.

What could the future hold? Maybe a book – and turning her cool TV shows into school lesson plans.

“Put some of that eye candy in front of the kids,” as Bir puts it, and “give them a little science once they’re pulled in.”