Learning Opportunities for Kids at the Detroit Institute of Arts

There are a ton of things to do in Detroit's DIA museum. Get your family learning about art on your next trip with these helpful insights for visitors. 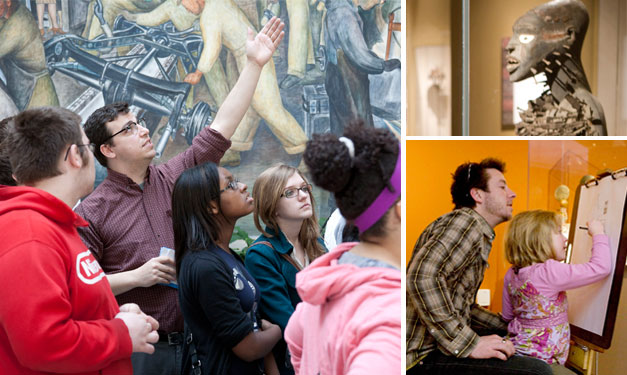 Its slogan is “Let Yourself Go.” And, when visiting the Detroit Institute of Arts, that’s great advice. Step in. Relax and roam. And remember: You’ve already got the best tour guide in town.

“Go where your kids are interested,” explains Jennifer Czajkowski, vice president of learning and interpretation. “The kids can lead and the parents can follow.”

The learning will follow, too. Before long, kids’ brains are churning. Whether they’re trying to count all 27 of the panels in Diego Rivera’s Detroit Industry murals, ponder why ancient Egypt mummified its dead – or consider what the two expressive young girls in popular 1882 French oil painting The Nut Gatherers perhaps just said to each other.

Call it critical thinking and visual literacy. The DIA calls it organic. “Think about the art museum as a walk in a big park,” Czajkowsi suggests. “You’re looking and you’re wandering and you’re discovering. You’re seeing things to stop by.”

Bit by bit, that is. Especially with some 5,000 works on view filling 100 galleries on three floors.

“Try not to sweat it,” she says. “Don’t feel pressure to talk about art. Just being in this space, it’ll happen.” That goes for both the masterpieces and museum itself.

Why the DIA is special for kids

Dubbed a “temple of art,” this Beaux-Arts building begs to be ogled and explored. Its stately Great Hall is filled with regal knights’ coats of armor, flanked by soaring smooth walls and opulent chandeliers. Nearby is a quaint spiral staircase children have tromped up and down since 1927. A dark limestone chapel is cozy nook; feel the mood shift in the big white wide-open spaces of the contemporary galleries.

“Kids don’t often come to an architectural space like (this),” says Czajkowski. It has the power to uplift, inspire – and “just make you feel good.”

Its collection, which dates to 1885, is also rich in history and diversity.

“We’re a great place to look at the different ways different cultures have approached their problems and expressed their identities,” Czajkowski adds.

Far from stuffy, the DIA is filled with stuff that will pull kids right in. In no particular order, here are some of the coolest things you may not know about.

You can also download the popular 10 Things to Do at the DIA PDF for a few extra ideas and details.

Not sure where to start? Before visiting, explain to kids that DIA is a place where “people have collected what they think are some of the most important works of human creativity from all over the world and all different times,” Cjazkowski says. “You’re going to see things that are really interesting, that draw your attention.”

That gets them primed. There, watch for that connection – and just ask, “Why?”

A 4-year-old may love a cute dog painting because it’s happy and they have a puppy at home; tweens might be pulled by a more complex piece that brings to mind an emotional experience they had with a friend. “Whatever stage a child is at developmentally,” Cjazkowski says, “they’re going to be drawn into a work.”

And, while it’s tempting to buzz through the DIA, slow down, savor and see what’s catching your kid’s eye. Take a cue from the museum’s “visual thinking strategies” philosophy. It sounds fancy, but it’s basically getting kids to “notice more,” explains Scott Boberg, former head of DIA’s interpretive programs.

“We want them to wonder about what they’re thinking about, reflect – and maybe re-form their thoughts.” So a glance can become a three- or six-minute chat. In the moment, ask:

And, after a day at the DIA, don’t discard some good old-fashioned “classic parenting questions,” adds Czajkowski, herself a mom of two, such as:

Bring your smartphone or camera, too. Except for special exhibits, you’re allowed to photograph/film stuff at the DIA, so long as they’re for your personal home use. So have kids snap their favorite finds and look them up together later on to learn more.

“Going with somebody they trust is the best thing,” Cjazkowski adds. “Don’t feel like you have to know everything. Go have a cookie in the cafe. Just spend time together in this space.” That in itself starts to ignite a life-long connection with the arts.

Plus, read up on more tips on getting the most out of your family’s trip to the museum.

What are your family’s favorite things to do and see at the Detroit Institute of Arts?

Easing Back-to-School Anxiety in Your Child With Autism

Canning or otherwise preserving food can extend the shelf-life of your produce but it's important you do it safely. A Macomb County food preservation expert explains.
Read more
Sponsored Content