Dr. Tonya Matthews, President and CEO of the Michigan Science Center in Detroit 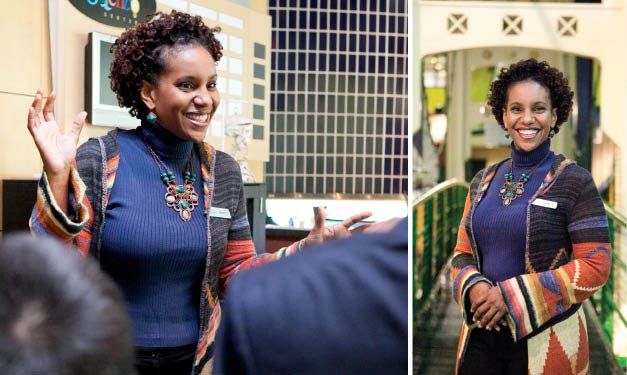 As a kid, Dr. Tonya Matthews loved museums. She would stop to read and touch every display, slowing down the entire family. She was unlike her brothers and sisters, who had to be coaxed with ice cream to tag along.

“But I never thought about working in one,” Matthews says. “I didn’t know that real people worked in museums.”

Now, as the president and CEO of the Michigan Science Center, the 39-year-old gets to do just that – and encourage future generations to experience the magic she did. She moved into the role in October. But it wasn’t a snap decision.

After all, her choice came nine months after the former Detroit Science Center reopened as Mi-Sci – after $6.2 million in debt and looming liquidation forced its closure in September 2011.

“Our story is mirroring the story of Detroit,” she explains. “We were big, then we cut back, then we had financial trouble and now we’re back. We can grow.”

This energetic leader’s museum career also came in a roundabout way. Matthews credits her mom, a teacher, and dad, a policeman, with dragging the kids to museums in Washington, D.C., near their hometown of Bowie, Md. She’d go on to earn a bachelor’s in biomedical and electrical engineering from Duke University – and do her doctoral work at Johns Hopkins University. Then, unexpectedly, she got into student teaching.

“I was in biomedical engineering because it was close to saving the world,” Matthews says. “This is solving diseases, fixing body parts – everything from internal organs to prosthetic hands. Then I realized I wanted to save the world and that, maybe, I needed an army. That’s where teaching and education come in.”

It was love. Matthews volunteered to teach community workshops. She enjoyed explaining complex subjects in ways everyone could grasp.

Then, she applied for an internship at Maryland Science Center. They offered her a job, instead, that involved getting young research scientists out on the floor. The goal? Give science a face and personality – and help these 20-something students explain the field to kids.

“But I was still not yet a convert,” Matthews says. “I still didn’t know people really worked in museums for a lifetime.”

Her chance came quickly. After a brief stint at the U.S. Food and Drug Administration, the Cincinnati Museum Center came knocking with a gig, and she was hooked for good.

It was a different world. Kids’ museums are high-energy and hands-on, she explains, while history museums are expert storytellers – and science centers are masters of investigation. Cincinnati incorporated all three.

Matthews mastered the art of creating ways for kids to explore and ask questions.

“I am on the spark end of the spectrum,” she says. “We get kids excited about learning something new. They want to know more, investigate.”

During her stint as VP, she was key in turning the museum’s focus on S.T.E.M. – science, technology, engineering and math.

It’s a subject close to Matthews’ heart, and at the heart of her mission at Mi-Sci, both for visitors and kids at the adjacent University Prep Science + Math Schools. While S.T.E.M. is gaining traction in the U.S. she says, it has a ways to go. One hurdle: Getting more girls involved at a young age.

“The reality check is there are a lot of subtle and not-so-subtle messages that tell girls that S.T.E.M. is not for them. This happened when I was a little girl,” she says. “Subtle things from teachers where, are they calling on the boys more – do they take what girls say and answer it in the same way? Is your girls’ day insanely pink and the boy’s day all about building? It sends the opposite message.”

Matthews doesn’t have any kids of her own, but she plays a key role in the lives of her eight nieces and nephews. Being the only scientist and Ph.D. in the family, Matthews jokes that she routinely gets calls from her siblings to help their kids with S.T.E.M.-related questions and homework. She also encourages her nieces and nephews to challenge themselves and face adversity.

“Science still scares people to death,” Matthews says. “There’s this myth that science is the playspace of geniuses and regular people don’t belong. But nothing could be farther from the truth. Because it still has this mystique, parents and teachers are hesitant when their kids want to do this. They don’t know how to help them get there. I say, ‘Bring them to the science center. We can help.'”

Michigan's Adventure opens May 27, 2022. Learn more about the park's attractions, ticket prices and everything you need to make the most of your trip.
Read more
Guides

It's a given for grown-ups but new turf for little ones. So how do you teach kids to wipe their butts properly? A metro Detroit pediatrician has the scoop.
Read more
Camps

Looking for a summer camp in or near Macomb County? We've got you covered with some of the coolest camps in the area, courtesy of Make Macomb Your Home.
Read more