Help Save the Detroit Science Center 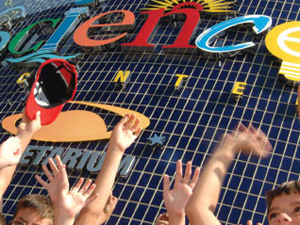 A favorite attraction for southeast Michigan science-loving kids is shuttering – at least temporarily.

The Detroit Science Center announced that it’s closing from Monday, Sept. 26-Oct. 12, 2011 to get is financial house in order. If it doesn’t, the center, which has been open since 1978, could close permanently, taking with it the more than 200 hands-on exhibits, including the popular Kids Town exhibit that lays a foundation for science learning for kids under age 5.

The Detroit Childen’s Museum, which the center also operates, will be closed as well.

The center’s website says that all “programs, events and group trips during this time will have to be rescheduled at a later date.”

In a statement released Friday, the center’s interim president and CEO John Miller explained that the hiatus will allow the center to “hold down expenses, conserve operating cash, re-examine the museum’s operations from top to bottom and work towards developing a strategic plan to ensure the long-term viability of the Detroit Science Center.”

Detroit has some stellar museums and cultural attractions for families – from the Detroit Zoo to the Ann Arbor Hands-On Museum – but we don’t have many. But quality still counts and the Detroit Science Center had that. In addition to all of its interactive exhibits, the Dassault Systemes Planetarium and live shows, the center brought in some nifty traveling exhibits over the years.

Two years ago, it orchestrated a major coup, bringing the super cool Accidental Mummies of Guanajuato exhibit to Detroit, which was the first time the exhibit had traveled outside of Mexico. For older kids, this was creepy and fascinating, easily inspiring all sorts of curiosity about anatomy and history. According to a report in the Detroit News, some financial issues related to this exhibit contributed to the center’s current problems. That’s a shame.

But a bigger shame will be if the center closes indefinitely. Sure, kids can still go to the Cranbrook Institute of Science in Bloomfield Hills. But although both museums focus on science, they have their own unique appeal. Besides, I’d hate for the city of Detroit to lose this gem for area kids  – those living in the suburbs and the city.

I don’t know if there is anything we can do about it. Signing petitions, if there are any, doesn’t pay the bills. But maybe making a small donation to the Detroit Science Center will help the bottom line and show community support. It’s worth a try and the center accepts donations as low as $1. Surely, it’s worth $1 (though $5 is nicer) to make an effort to save one of the cultural gems for our kids. To put our money where this blog is, Metro Parent will donate a dollar for every “Like” this blog gets. Basically, share this blog post on Facebook by clicking the “Like” button above to help get out the word to show support to the Detroit Science Center, and we’ll donate $1 for every “Like” the blog post gets (up to $100) by Oct. 12, when the Detroit Science Center – hopefully – reopens.

If you value the science enrichment that the Detroit Science Center offers and want it to be available to area kids, consider showing your support and spreading the word.