Christina Li has been recognized for creating a coding camp for middle school girls called Hello World. Here, she talks about her passion and future. 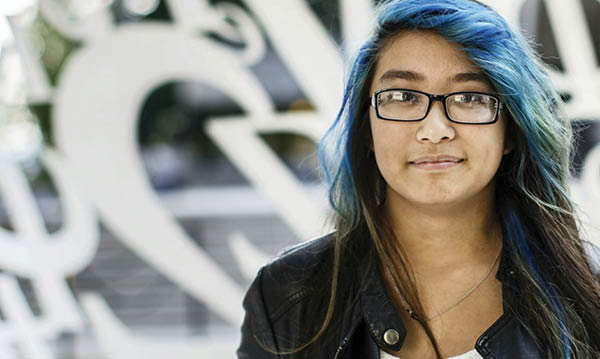 Christina Li was in third grade when she stumbled on Coding For Dummies. Now 18, Stanford University bound and nationally recognized for her coding education efforts, the Macomb Township teen says that book ignited her passion and prowess for computer science.

“We were really bored during the summer and we would go to the library a lot,” Li says of how she and her two brothers – they’re triplets – spent their vacations.

A programming class sealed the deal. Soon, the Utica Stevenson High School teen was attending coding camps, robotics competitions and programming marathons in Michigan and beyond. There was just one problem: Where were all the other girls?

“I’m the only female programmer on my robotics team. The gender gap is really noticeable,” Li says. “Computer science is a pretty new field. We’re just starting off, and we should start off on a good foot.”

So during her junior year, she came up with Hello World, a day camp to get girls interested in coding. During spring and mid-winter break, Li taught middle school girls in Utica schools how to make apps, games and more. They also had top computer engineer guest speakers and went on field trips to places like the Microsoft Tech Center and Google Ann Arbor.

“I wanted to start teaching the girls while they’re still young and open to new ideas about computer science,” she says. And it’s resonated. In January, Li traveled to Washington, D.C. to be honored as a White House “Champion of Change” for computer science education. Li and Hello World will be featured in Nickelodeon’s docu-series The HALO Effect that airs May 20 – and Amy Poehler’s Smart Girls organization also recently filmed a TV segment about her.

But the accolades aren’t the point for Li, whose funky blue hair is as cool as her reason for trying a welding class (“I just want to take something relaxing, engaging me in a different way”). And she’s focused on the big picture.

“With the internet and all of that, you can get so much information. You can learn about psychics, quantum mechanics … but not everyone has access to that,” she says. “Hopefully with new chips and ways of processing, computers can get cheaper so every child can have access to the internet.”

With acceptance letters from MIT, Harvard, Princeton and Yale – to name a few – Li plans to attend Stanford in the fall with a major in computer science, a track of mechatronics and a five-year plan to get a master’s degree.

“I want to do something with researching robotics,” she says.