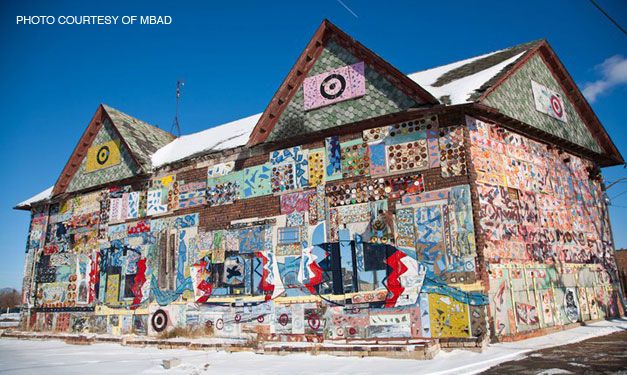 Letters on the striking N'kisi Iron House, covered in mirror shards and funky painted patterns and creatures – glittery and visible from I-96 – set the scene: They spell out, "Where 'African Town' Begins."

The MBAD African Bead Museum & African Bead Gallery delivers just that, including a rich (and often surprising) variety of artistic creations, both indoors and outside, that speak to African history and culture.

And, owner/artist Olayami Dabls says, children are especially drawn to it – thanks in large part to that big, eye-popping house. "They really are captivated by the house, because they can relate to it," Dabls explains. "They live in houses, but they've never seen a house like this." The structure is now a sculpture; truly, a piece of art.

Also outdoors, you'll find Dabls' 16 public art installations that span a block, weaving a storyline of African culture that's uniquely Detroit. Little children are drawn to the colors, as well as an 18-by-115-foot African Language Wall, illustrating the country's 28 languages. Older kids may ponder deeper metaphors – like what the broken mirrors on the N'kisi could mean.

There are other interesting, unexpected experiences outside, too. Rusty metal pieces making noise in the wind can "turn into music," Dabls says. Observing nature interact with the collection of structures made of scrap materials "is a sight to see in itself," he adds. Watch for squirrels, birds and rabbits by day – raccoons, possums or even owls when it's darker.

Inside the museum, meanwhile, families will find it filled with sculptures, textile, pottery and, of course, many beads. A few are up to 400 years old! Some are for sale, too. You can buy a few of your own to take home; prices range from about $3 on up to $500.

But these beads are more than pretty baubles or jewelry. In African culture, "Beads were used as literally a language that could be read without anyone saying anything," Dabls explains. Made of sturdy stone, glass, wood or metal, they protected the unborn, signified when kids became adults and when adults could marry, among other things.

Kids also love the sculptures on display in the museum – some up to 6-feet tall. "They're not programmed how to react to them," Dabls says of kids' reactions. "It's a totally different experience."

Want a little more context? Dabls himself hosts tours, by appointment during normal museum hours (see the sidebar above for details).

The complex is open year-round. Sometimes, in winter, a few 50-gallon barrel fire pits are burning outside to keep your family toasty. In summer, watch for occasional project-making workshops for children, too.