How to talk to your kids about the meteor that tore through the sky, plus tips for keeping kids interested in astronomy. 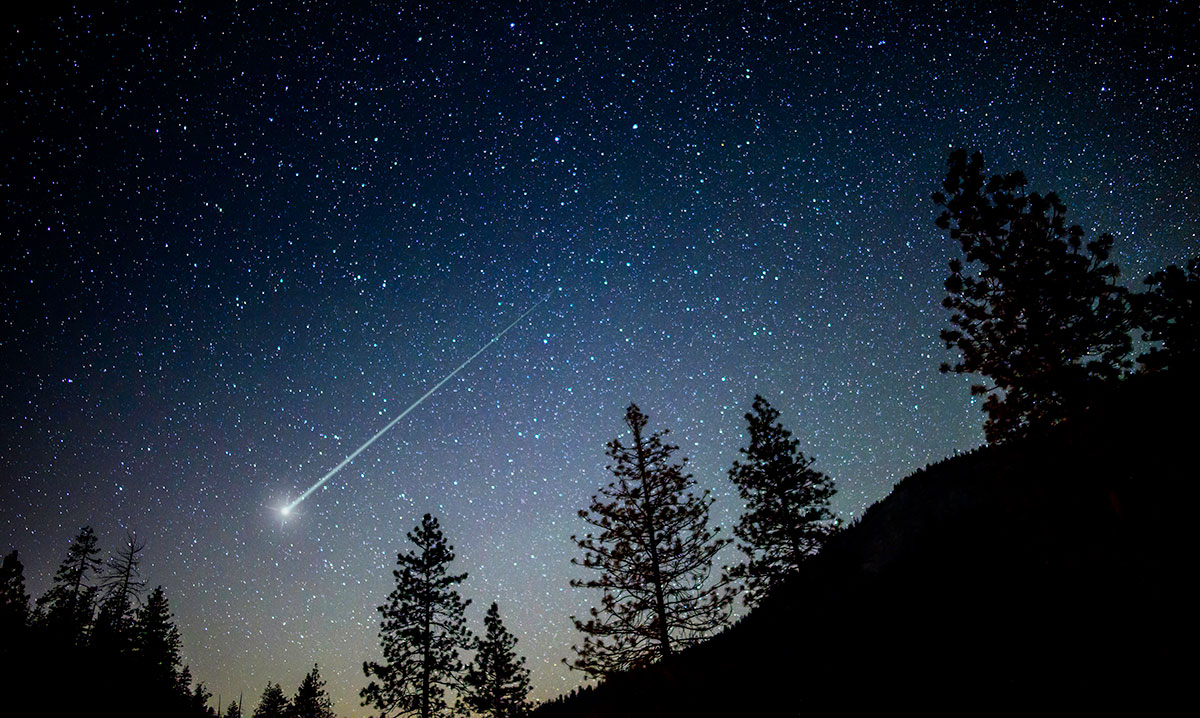 “Are we going to end up like the dinosaurs?”

It’s a question many kids in metro Detroit were asking after a meteor tore through the sky on Jan. 16, 2018, causing a bright flash and a sonic boom felt across the region. According to the U.S. Geological Survey, the meteorite impact measured at the equivalent of a magnitude 2.0 earthquake, NPR reports.

As conversations in southeast Michigan households went from “Who did that?!” to “Wait, that was a meteor?!” in a matter of minutes, it’s natural that kids might have some questions. That’s good, says Michael Narlock, head of astronomy at the Cranbrook Institute of Science.

“It’s really captured people’s imagination, which is a great thing,” he says, adding that other astronomical events like eclipses and comets have had the same effect. “It just inspires people to get more interested in the world around them. These events are little touchstones to sort of reinvigorate that spark and that interest.”

Here’s a look at Narlock’s answers to some of the most common questions about meteors and the recent incident here in Michigan.

What is a meteor?

It’s a small object from space that enters the earth’s atmosphere.

Is it the same as a meteoroid?

There are actually three terms you should know: meteor, meteoroid and meteorite.

“The fundamental difference between all of them is where you find them,” he says. “A meteoroid is something you would find in our solar system floating out in space.”

A meteor is “what you see streaking across the sky at night, the little grains of sand that hit our sky and burn up,” he says. “A meteorite is what you would find leftover from an impact.”

You may have heard the recent Michigan meteor referred to as a bolide, “which is just a fancy word for fireball or a meteor that explodes in the atmosphere,” Narlock says.

Instead of just burning up or hitting the ground, this type of meteor actually explodes.

“The big flash of flight was this meteor coming apart and exploding,” he says. “It was burning up as it was plowing through the atmosphere moving at 10,000, 20,000 or 30,000 miles an hour – it got to a point where the internal pressure became too much and it exploded.”

How big was it?

It’s only guesswork, Narlock says, but he would guess that the meteor was about the size of a cargo van or something similar.

How often do they hit earth?

What’s unusual about this particular event, he says, is that it happened at the right time and place.

“It happened at night, it happened in the wintertime so you had all this nice, bright white snow to reflect the light, and it allowed people in a large metropolitan area to see it,” he says, and the increasing use of dash cams and doorbell cameras helped document it. “We are able to have video evidence of this and it’s remarkable.”

Isn’t this what killed the dinosaurs?

Because of the size of this meteor, however, it “definitely would not have done anything.” So far, no injuries or property damage have been reported.

Did scientists see it coming?

“Nope,” Narlock says. “Nobody knew what was happening.”

It may come as a surprise to know that no government agencies currently track small objects in space like this.

“The people who track the small bodies in our solar system are quite honestly amateur astronomers,” he says.

If it was bigger, would scientists be tracking it?

Maybe – “If it was ginormous,” Narlock says. The bigger it is, the better the chances at detecting it.

Can you find pieces of the meteor?

Potentially. “Where they’re at, though, is anybody’s guess,” Narlock says.

While initial reports suggested the “epicenter” was around Macomb Township or New Haven, newer data finds it may have hit north of Chelsea.

“If it’s what we think, more likely than not it is black-colored rock that inside is a different color,” Narlock explains. “I would guess they would be tiny fragments.”

Should we be afraid of meteors?

“Don’t worry,” he says. “These are not things to worry about, especially for kids. They’re things to marvel at. Our atmosphere does a really, really good job at being a force field for us, to burn things up or divert trajectories.”

In fact, he says, “this is one of the prime examples of nature and the universe in action.”

“It’s a lot like a tornado or a hurricane; something beautiful in a way, something that can do a lot of damage, but we learn from it,” Narlock says. “It increases the cache or knowledge that we have.”

Will it get a name?

Maybe. While the event itself doesn’t get a name, “if we find any meteorites, they will be named for where they are found from that particular fall,” Narlock says.

That spark your kids are feeling right now for science all thanks to the meteor? Don’t let it go out!

“These events are great but we have to sustain the enthusiasm about the wonderful things that are happening,” Narlock says.

But the great thing about astronomy is that it’s fairly accessible: “The laboratory is above all of us,” he says. “You can get a modest backyard telescope and search for small bodies in the solar system that one day may come and make a light show at night.”

“Being involved with your child and their education and fostering their interest by going out and doing is the best way to foster in them a lifelong love of science and learning,” Narlock emphasizes. “I think it’s incumbent upon all parents do to just that.”

In addition to using a telescope at home, here are some other ways to keep your kids interested in science and astronomy.

In March, metro Detroit's trees are packed with the sugary sap needed to make maple syrup. Learn about the process at these 2022 maple sugaring events.
Read more
Attractions