From astronomy and health to technology and math, this hands-on Detroit museum offers kids of every grade and age a fun chance to explore and discover. 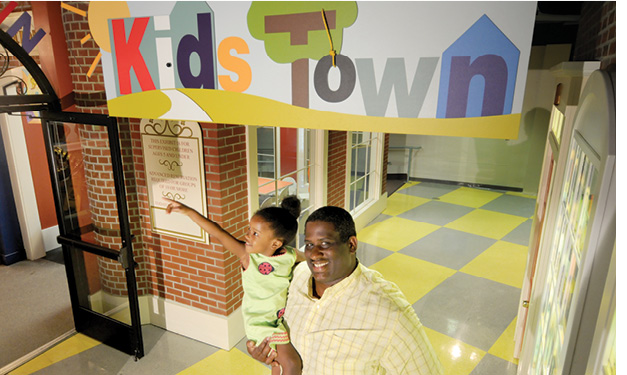 It’s dark. Thousands of white, shimmering dots blanket the night sky above. You begin to approach a strange dark mass. Suddenly, a tiny voice in the darkness rings out, saying: “What happens when you fall into a black hole?”

This was the toughest kid question Buddy Stark, an interpreter for the Dassault Systemes Planetarium at the Michigan Science Center, ever had to answer. The answer was spaghettification – which, while it sounds yummy, is actually a process by which gravity tears an object apart.

“Astronomers have a sense of humor,” Stark says. Naturally, he couldn’t tell this little girl that a black hole would rip her apart at the atom in the unlikely event she ever fell into one. So instead, he bounced around the question and explained that black holes and people don’t get along. “Stay away from black holes,” he advised.

Stark wisely opted out of giving a child a black hole-induced nightmare. But he did get her asking questions and excited about science.

And that’s what MiSci – where the goal is to inspire kids to explore science, math and technology with hands-on exhibits, shows and activities – is all about.

The 110,000-foot facility bursts with four core galleries and more than 250 hands-on exhibits designed to teach kids about math, science, engineering and tech.

With so much to see, Meredith Gregory, MiSci’s public programs coordinator, recommends carving out at least three hours to do the major hands-on activities; more to see it all.

Smaller bites may be wise, especially for littler ones. Of course, every kid is different, so think about your child’s needs and interests before visiting – maybe explore MiSci’s website together and see what draws their eye.

No matter what, though, there’s really something for everyone.

Then, cross the 80-foot-long replica of the Mackinac Bridge, the Mini Mac, at Roads, Bridges and Tunnels. Or learn about light and sound waves in the DTE Energy Science, Sizzle and Spark exhibit, check out the life-science demos in the Cell Lab, play the part of a 19th-century scientist in the Centennial Laboratory, learn about automotive technologies and live animals – and much more.

There’s even fun tailored for preschool kids at Kids Town, a permanent tiny town just for ages 5 and under. It features a fountain that teaches water flow and buoyancy, Wiggly Worm area for tykes 2 and under, pet shop with live animals and animal x-rays, diner, ball pit and more, all aimed at the development of social and motor skills.

The highlights, though, are the Chrysler IMAX Dome Theatre and, of course, the planetarium – which features a three-story dome for viewing. Kids learn all about space as they see planets and fly through galaxies among 9,000-plus stars.

Stark loves it. “I get to sit under a big eggshell and get kids excited about science,” he says. His favorite shows are the ones where people are “oohing and ahhing.”

Among the shows are Basics of Astronomy and Our Place in Space, opening in fall 2014 and geared at grades 5-adult. Just outside the planetarium is the Space gallery, displaying four 10-to-1 scale model rockets that were sent into space – and showing how Apollo astronauts traveled. Plus, pedal a bike to the moon, see photos of astronomical phenomena and more.

It’s enough to get kids of all ages pretty geeked about science, says MiSci senior marketing manager Kerri Budde – whether it’s thinking about a future career or, like the case of that little girl in the planetarium, simply wanting to discover more.

“I hope that it will inspire them,” she says.

Take a trip inside the human body, for instance, at the Health and Nutrition gallery. From a giant heart model to a junk food wall, kids get a taste of everything from anatomy to good eating. They can even bike or propel a wheelchair to find out how much energy it takes to burn off calories from broccoli vs. a cheeseburger – and then sit with two giant coach potatoes to learn how TV doesn’t help BMI.