The Michigan Science Center is a learning destination for metro Detroit kids and parents that's packed with interactive exhibits and more to explore. 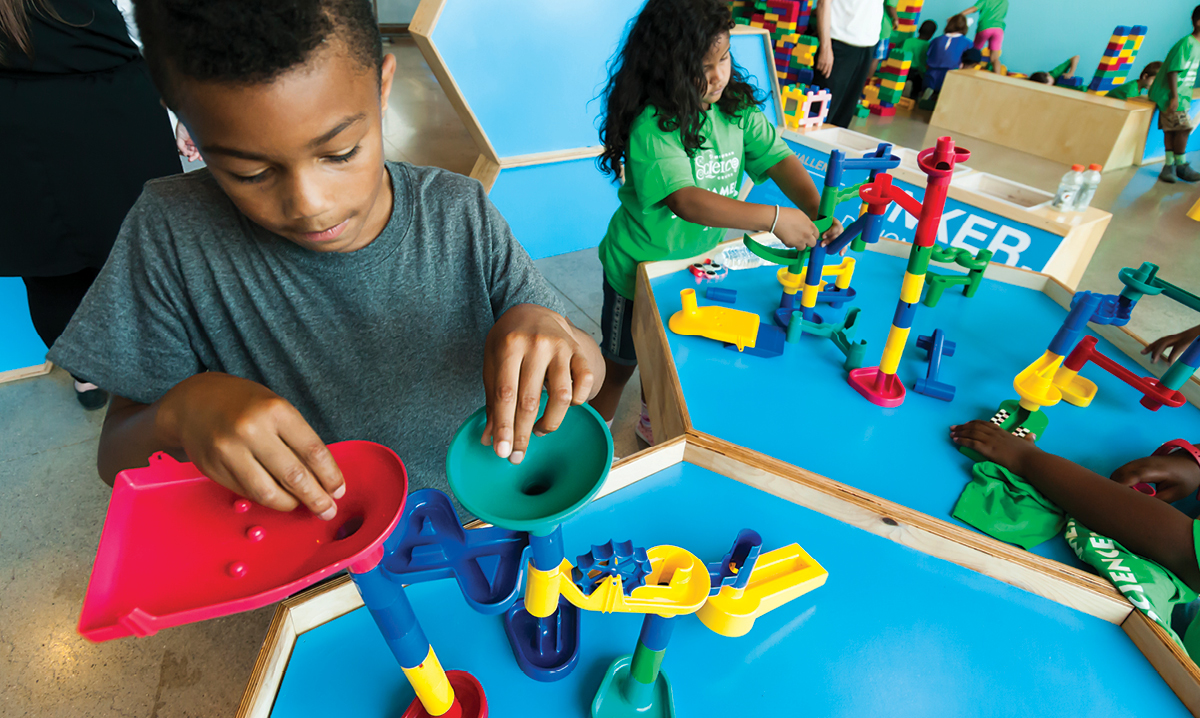 Want to help kids learn science outside of the classroom? The Michigan Science Center offers plenty of interactive STEM fun in science, technology, engineering and math. The nonprofit, known as MiSci for short, features 250-plus interactive exhibits, plus five theaters – and loads of fun for families.

And this very hands-on museum, formerly known as the Detroit Science Center, isn’t just fun for kids. Parents will love the interactive STEM fun, too. While you’re here, check out these must-sees for kids at the Michigan Science Center.

Space, motion and engineering are among the themes at the various permanent exhibits that greet young explorers and their families.

Blast off in the Space Gallery, featuring a rocket gallery full of models like an Apollo training capsule and much more. Plus, see the Heliostat, which gives you up-close views of the sun – and the Voyageur, where you’ll find a touch screen activity allowing you to explore even more science pertaining to the Earth and beyond.

The Health Gallery lets families puzzle out their BMI and get an inside view of the human body. Also, get the scoop on nutrition and wellness.

Another staple is Kids Town. Designed just for ages 5 and under, it lets little scientists stretch their social and motor skills while tackling everyday science basics.

For some bonus extra credit, MiSci also hosts special exhibits open to visitors for a limited period of time.

Check out the Smithsonian Spark!Lab, which focuses nurturing kids’ inventing skills with lots of hands-on materials to build and play with. For instance, in the summer of 2018, kids were able to design an alien and build a droid to pick up their toys, all with a Star Wars theme.

The space also features insightful interactions with facilitators and occasional inventors from the community. Self-led exploration is the key here to encourage kids to cultivate the critical-thinking chops that are the basis of inventing and entrepreneurship.

Plus, stop by the STEM Playground to learn things like how to position a sail to travel in wind, how engineers design the things around us and so much more.

“The STEM Playground consists of challenge spaces where guests will exercise their STEM skills to create and test paper airplanes, use their imaginations to build with blocks,” MiSci’s website notes.

Watch for occasional rotating exhibits, too, which tour MiSci for a short window, typically several months.

On screen and stage

A planetarium and stages for live demos and learning: They’re among MiSci’s science stages, all of which are staffed by engaging “STEAM Activators” who love helping kids discover new horizons.

Do some stargazing at Dassault Systemes Planetarium shows – which are also among the reasons the Michigan Science center is fun for parents, too. A live offering, What’s Up? Your Guide to the Night Sky, features the constellations, stars and planets – plus our place in space, facts on light pollution and more. A real-life presenter takes you on your journey through space in the three-story-high dome.

Plus delve into immersive documentaries at the Toyota Engineering 4D Theater, catch 20-minute live shows on the Chrysler Science Stage (Kaboomistry and Anatomy Academy are among the offerings) – and hit the DTE Energy Sparks Theater for 30-minute electricity shows that’ll make your hair stand on end (literally!).

Be sure to discover the other goodies here, too. Feeling hungry? Swing by the Cosmic Cafe for food ranging from hot dogs to paninis and enjoy it in the Lunar Dining area.

Register for a variety of Michigan Science Center camps, too, ranging from spring and winter breaks to summer offerings, as well as Homeschool Learning Labs. The STEMinista Project also aims to get girls in grades 4-8 geeked about future careers in science fields.

Plus, each summer, MiSci teams up with Metro Parent to offer Virtual Camp: Summer of Science. This series of six video experiments, with a fun cast of characters including puppet Izzy, typically runs in July and August and lets you join in the STEM fun right from home.

Note that MiSci is closed Mondays and also for about a week after its summer season concludes, starting on Labor Day in early September.

Admission prices for the Michigan Science Center are $14 for adults and kids ages 13-plus – and $11 for children ages 2-12. Expect to pay about $7 for parking in the nearby area. There are package options available, as well – and a Michigan Science Center membership if you plan to visit the MiSci more regularly. Watch for occasional free days, too.

Photo of the STEM Playground courtesy of the Michigan Science Center