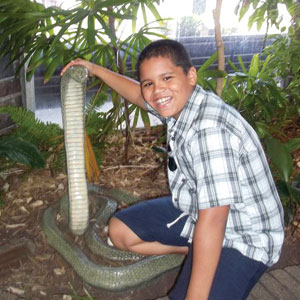 Sure, the presidential election is on Tuesday, Nov. 6 this year. But did you hear who was voted the new mayor of Amphibiville at the Detroit Zoo in Royal Oak?

That would be Gabriel P.J. Graydon, 11, of Southfield. News hit today – Halloween, Oct. 31 – that he was just sworn-in to a two-year term presiding over this two-acre wetland village, which is home of the National Amphibian Conservation Center.

The Detroit Zoo kicked off its contest to find a new “slime-loving politician” – not to be confused with slimy, of course! – back on Sept. 5. Gabriel made a strong case in his 100-word essay for the competition, which was open to Michigan kids ages 7-12.

“I love and understand what they are and why they exist – and the benefits of their existence on earth,” Gabriel explained in his essay. “Under-appreciated species are my passion. I think it is time to put that passion to work.”

In a phone interview, he also told Metro Parent, “I appreciate their helping of the environment” – and he thinks they’ve got pretty awesome anatomy, from frogs’ abilities to “jump very high” to that sticky stuff on their tongues that catches buggy snacks.

Gabriel, an academically gifted sixth grader who plans to study insect ecology and herpetology in college (and frequent visitor to the zoo, his mom, Tamika Graydon, says), beat out 57 other candidates to earn his office.

He gets a plaque inscribed with name, certificate acknowledging his position, plush frog and a one-year family zoo membership.

The outgoing mayor is Claire Kozal, 10, of Whitmore Lake. Amphibiville has a wide variety of frogs, toads, salamanders, newts and caecilians. The Wall Street Journal has dubbed it “Disneyland for toads,” the zoo notes.