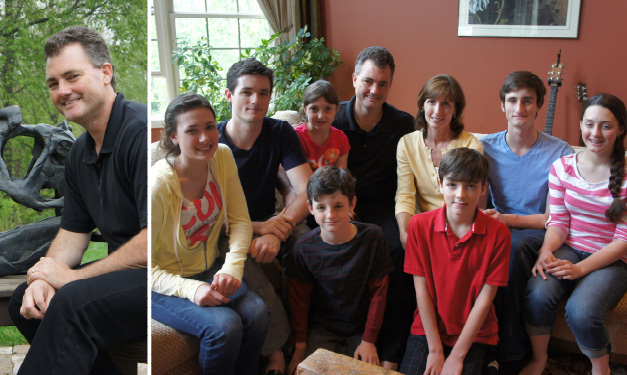 This story appeared in the June 2012 print edition of Metro Parent.
Photos by Kelly Buren

You think you're busy? Michael Stafford is busier.

He juggles hobbies like beekeeping, scuba diving and reef keeping (read on to see what that is) with a demanding job – and being the dad of seven kids ranging in age from 20 to 7 years old. Oh, and he works out daily.

Stafford is director of the Cranbrook Institute of Science. Interestingly, he originally came to the museum with the idea it would be a temporary stop.

"I literally begged my way into a job as a curator, with the full intent of going on to be a professor of Danish and Swedish prehistory," says Stafford, whose Ph.D. is in that area.

Cranbrook's creative spirit hooked him, though, and he's been there since 1996, with a brief detour to the Milwaukee Public Museum. He loves Cranbrook's nature as a secluded educational community where everyone is engaged in intellectual pursuits.

"The entire environment encourages excellence and is fixated on creativity," he says. "It's so rewarding. It's as far from a corporate culture as you can get."

Why not take the kids to explore the Cranbrook Institute of Science in Bloomfield Hills?

One of the more exciting aspects of his work is helping the museum engage the community in new ways. They're providing supplemental science instruction to Detroit Public Schools and looking to do the same with other districts. The mission? To become a jumping-off point for curiosity and a starting place for people to become more informed, thoughtful global citizens.

"We're combining experiences in really unusual ways," he says.
Running a well-regarded natural history museum and being the dad of seven means a pretty heavy-duty schedule. Stafford's day usually starts before 6 a.m. at the gym; then it's home to clean up, check email and news websites, and review the upcoming day. Then he heads to his office. From there, he's traveling Michigan to spread the word about the museum's mission, giving tours of the facility for donors or participating in events.

Once Stafford's back home, he might make dinner – or wife Theresa or daughter Sarah may be manning the stove. Then, as you'd expect from a parent of a large and active family, there's getting kids to various activities.

"One of the best things that ever happened in our family was when we had one kid who had a driver's license," he laughs. "Sometimes you feel like you have to bi-locate."

These days, seven kids is an unusually large family. But Stafford says they hang out with lots of families who are as big or even bigger, so the rude comments or incredulous questions don't really happen. Both he and his wife are the middle children of three. As they started having babies of their own, they discovered they really enjoyed parenting and wanted to continue having kids.

"Theresa is a world-class mom," he says. "By the time we had three kids, we kind of said, 'We think we know what we're doing and we seem to be producing really terrific kids, and we've seen most of the issues and have most of the stuff,' so it just worked out that way. We're blessed with seven healthy kids – all singles, and no twins in the mix."

As the children have grown, Stafford says he's proud that they're turning into the kind of people he'd like to see: "The world needs more thoughtful, caring, terrific people. We hope all our kids end up (that way)."

A lot of credit goes to his wife, he adds. "Theresa's the one doing the daily battles and headaches of having so many kids. I go to Cranbrook and have fun all day, and she's sweating the details of who's going where and who is doing what. She's the one helping our life run – and run smoothly!"

With such a large family, having one-on-one time with each child can be a challenge, but he and Theresa prioritize that. It can be as simple as doing something with one kid and asking the others to join in if they want – such as a recent "Stafford Boys Golf Outing" he did with his sons. "We made a decision that no one would be penalized for being in a big family," he says. "They deserve opportunities to try things they are interested in." Each child also gets a trip of his or her choosing with one or both parents as a high school graduation gift.

Stafford himself is something of a Renaissance man. He maintains a live seven-foot coral reef in his living room, is an avid cook, scuba dives and keeps bees. He also makes tools from stones found at the family's northern Michigan home – and they're all avid downhill skiers.

"We live a very intense life," Stafford admits. "(My kids) live in an environment where I have an allosaur head in my home office – they're surrounded, like it or not, with stuff that really interests me about the natural and cultural world. I think they do realize I spend time doing stuff most dads don't usually do – and getting them involved if they want to."

Stafford's life is indeed intense, but he calls it a charmed one: "Theresa and I find ourselves looking around the table and wondering what did we do to deserve this terrific life with all these beautiful kids," he says. "I wouldn't change anything."