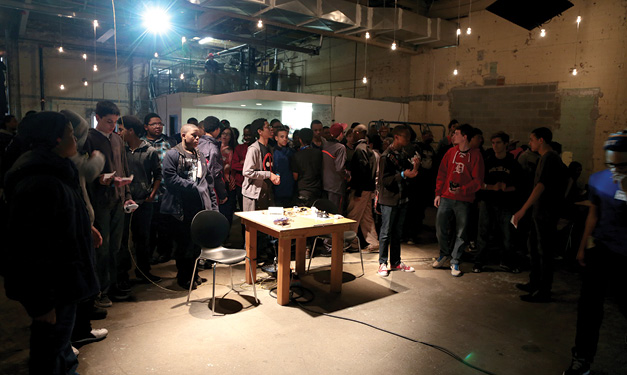 For artistic high school kids, finding a place to grow, shine and belong can be tricky. And the Museum of Contemporary Art Detroit is doing something about it.

On Oct. 17, it's unveiling the new members of its Teen Council. First launched in early 2014, this crew of 12-14 kids creates a slew of programs for their peers.

It's the brainchild of Tylonn Sawyer, youth program director at MOCAD, who felt there wasn't a safe, fun place in Detroit for like-minded artistic teens to gather.

"They meet once a month to come up with artistic programs," he says. "In addition, we provide them with a unique artistic opportunity."

The council features mostly ninth to 12th graders. They come from as far as Clarkston, and hail from a variety of backgrounds. Teens apply for a seat. If elected, they can remain on until they graduate.

During their stay, they get a chance to take workshops that would otherwise cost hundreds of dollars, meet with professional artists, fine-tune their artistic skills and hatch program ideas MOCAD brings to reality – all while getting paid.

"It takes the place of a part-time job," Sawyer says. "From January to September they did 50 events, which was the highest productivity of any department here."

That included a video game tournament Izora Roach, 16, of Detroit helped create. "I'm really into video games," she says. "It was really fun."

Roach's experience has helped her develop her chops, too.

"I was trying to break my habit of drawing anime, and while on the council I was able to get cartoony," she explains. "I developed my own style."

Her mother, Adrienne Roach, also saw positive changes. "Her ability to plan things is probably one of the most awesome parts of her involvement. She's able to complete pretty complex tasks without direction.

"It developed her as an artist and a person and a teammate."

Going into Teen Council's second year, Sawyer's goal is to keep things growing – and "get it to become a staple here in Detroit, so that everyone with young people will get them involved."