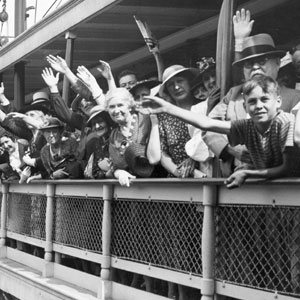 Translated, the French word Detroit means "strait." And, in the 18th century, the French dubbed one of the city's most famous rivers, Rivière du Détroit – The River of Straits.

Today, the Detroit River is one of the busiest waterways in the world. So, it would be a shame if the city didn't have a museum highlighting Detroit's maritime wonders, right? Well, it does – it's only been closed for about five months for renovations! But, on May 18, 2013, from noon to 6 p.m., people of all ages can visit The Dossin Great Lakes Museum on Belle Isle Park.

Your family is in for some new, cool adventures because this maritime machine will introduce two never-before-seen exhibits: Built by the River, which is a permanent exhibit, and A River's Roar – a temporary exhibit.

Through hands-on, interactive exhibit elements, Built by the River will showcase how Detroiters utilized the river and lakes to build industry and create recreation. Also, don't forget to check out the large display that simulates speedboat racing – similar to what would be seen on the Detroit River – and an 18th century canoe recreation at this exhibit!

At A River's Roar, your youngsters can check out the ins and outs of hydroplane racing in Detroit. After all, the Detroit River and Belle Isle have featured some of the finest racing for over 100 years.

Don't forget to check out some of the attractions that will be coming back to the Dossin, like The Gothic Room from the City of Detroit III, The Miss Pepsi championship hydroplane, The William Clay Ford Pilot House, The Ship Model Showcase and Outdoor Treasures.

Note: The Dossin Great Lakes Museum will be closed during the Belle Isle Grand Prix, May 31-June 2.

See the Metro Parent listing for more on the re-opening of The Dossin Great Lakes Museum on Belle Isle Park.