Keep kids engaged and entertained during the summer with these six activities that are sure to banish the vacation blahs. 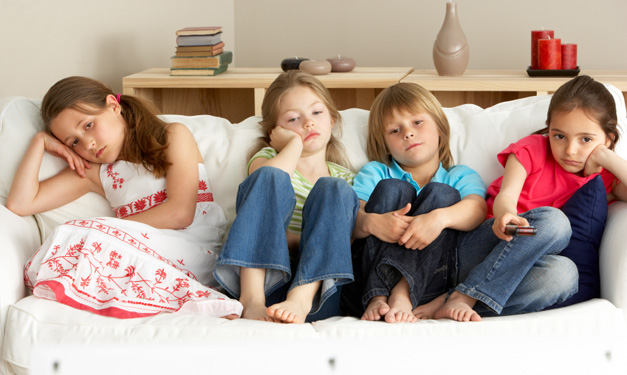 Some of my finest childhood memories are of sweltering summer days spent wading through the shallow creek close to home. With an empty jar in hand, my neighborhood buddies and I spent hours catching minnows and examining streambed rocks in search of the best skipping stone.

Times have changed – and so have the activities children engage in. Creative play that was birthed out of boredom has given way to electronic media that soothes mid-summer monotony. But it doesn’t have to be that way.

Summer is a time for mental rejuvenation and creative stimulation. Here are a few activities designed to keep summer boredom at bay while unleashing your child’s energy and imagination.

Children of all ages will enjoy this form of ice hockey. Lay a large, thick plastic sheet (such as a tarp) on level ground. Get two milk cartons and cut away the bottom halves and one side of each. Stand the cartons at opposite ends of the plastic sheet to be the goal nets. Measure and cut two rectangles (3-by-7-inches long) out of thick cardboard. Push a pencil into each rectangle to form a hockey stick. Use an ice cube for the puck.

Keep kids learning all summer, too, through fun everyday activities.

Here’s to your heritage

School-age siblings can enjoy learning about their heritage by interviewing a grandparent or other relative. Ask children to come up with a list of questions to ask a family member about his life, such as when and where he was born, what he remembers most about growing up, how he celebrated birthdays and holidays, if he played sports or took up a musical instrument, friends he had and what they did together, etc. Next, set a time for the interview, and send the interviewee a copy of the questions – so he knows what to expect and can think of stories to share.

During the interview, assign one child to video record the session, while another child acts as a “news reporter” conducting the interview. When they are finished, keep the information on file or have your children turn it into a family keepsake by writing and illustrating a short biography, making a timeline or creating a paper quilt with drawings that depict significant events in their relative’s life.

Children proficient at bike riding will enjoy designing and carrying out this activity. Find a large area where kids can hold a bike rodeo – like an on-hiatus school parking lot (get permission first, of course). Design a variety of events, such as the suggestions below. Ask someone to be the referee and hand out inexpensive prizes to contest winners.

Have your child lay down on a large piece of white paper and trace all the way around his body. Give him old magazines and ask him to cut out and glue pictures and/or words that describe who he is and what his interests are (i.e. words such as “happy” and “friendly,” or pictures such as a soccer ball or doll). He may also want to draw some illustrations and write in his own words. When he’s finished, have him cut out the figure and display it in a prominent place.

Children of all ages can take part in movie making. Give your children a video camera and let them brainstorm ideas. They could do a remake of The Three Little Pigs or Goldilocks, or their own rendition of a favorite TV show. Encourage them to devise a script, create props and a backdrop, and gather materials for costumes. Don’t forget the film credits! When the movie is complete, gather the crew, pop some corn and watch it together. Then head for the driveway for your own “Walk of Fame.” Trace the stars’ hands on the pavement with chalk and write their names next to their handprints.

Make this a family activity or neighborhood event. Divide into teams. Draw up boundary lines and set a time limit. Give each team a copy of items to find on the hunt. Items could include two different kinds of grass, a berry, a pure white rock, a seedpod, feather, a pinecone, something that floats, etc. The team that’s back the soonest with the most objects wins.