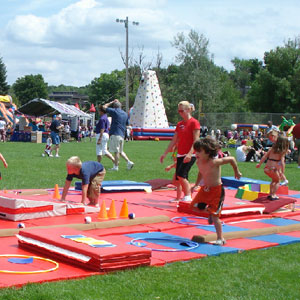 Whether you like craft shows, carnivals, musical performances or parades, the 2013 Independence Fest at Clintonwood Park in Clarkston has something for people of all ages, July 4-6, 2013.

Kick off your long weekend with the Independence Day parade at 10 a.m. on Thursday. This year's theme is "United We Stand." A Veteran celebration at 12:30 p.m. follows the parade festivities.

The event boasts a carnival for those thrill seekers in your family, plus a kiddie section for the little ones. Save some cash by pre-purchasing your ride wristbands for only $15 – by July 3. Wristbands can be purchased during the festival for $20.

If you have a toddler at home, there's an area just for them! The toddler zone, which is open from 11 a.m. until 10 p.m., features a trackless train, inflatables and much more to entertain your kiddos.

Head over to the craft show for some unique shopping. Snag items from nearly 100 Michigan-based crafters! The craft show is open 11 a.m.-5 p.m.

Plus, enjoy some entertainment by Cirque Amongus, 7 Million Jigawatts and Motor City Soul.

Grab some delicious eats, too, including pulled pork sandwiches, hamburgers, Greek pitas, hand-dipped ice cream, fudge and lots more. Not to mention, you can pack your own picnic lunch.

End your Fourth of July with a bang as spectacular fireworks light up the sky at dusk. Fireworks are launched at the Everest Academy – one of the highest points in the township allowing the whole community to see the display.

Parking for the festival is $5 per car till 2 p.m. and after 2 p.m. the cost is $15 per car. Shuttles are available for your convenience.

See the Metro Parent listing for more on the 2013 Independence Fest at Clintonwood Park in Clarkston.