A Cinderella Story at the Detroit Opera House 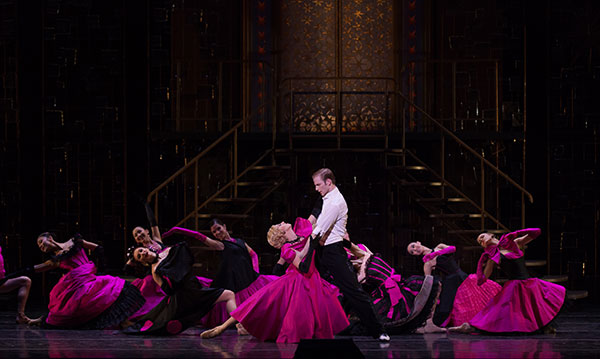 Have you ever wondered what it would look like to watch Cinderella and Prince Charming dance live on stage? Hold onto your slippers – ballet slippers, to be exact – because A Cinderella Story will debut at the Detroit Opera House March 18-19, 2017.

We all know the age-old tale. Many bedtimes have been dedicated to a telling of how the other sister, the housekeeper, the invisible girl meets her fairy godmother and sneaks out for a nighttime escapade at the kingdom’s biggest ball, only to grab the attention of the prince.

Then, with a shoe, her entire life is transformed.

Now, Cinderella’s story has been re-envisioned and revamped with a retro 1950s look and sound accompanied by two dozen ballet dancers who will take the stage for a brand new production at the Detroit Opera House.

Choreographer Val Caniparoli has shaped the storytelling of this production by mixing ballet with a vast array of other dance styles, including ballroom, showbiz, jazz, African and others.

“Ballet is still being shaped by consciousness, years later it’s still developing and I think that’s the way it should be,” Caniparoli says in an interview with Canada’s Royal Winnipeg Ballet, the company heading the performance.

His work will artfully showcase the talent of an acclaimed company founded in 1939 and is now the longest continuously operating company in North America.

“Cinderella should appeal to every age and hopefully you’ll see the stepsisters and you’ll see the mean stepmother and the father,” Caniparoli says. “They still follow the same footprints of the actual fairytale.”

Parents planning to bring children should keep in mind that the performance will be approximately 2 hours and 15 minutes in length. Tickets start at $25 on both days and are available for purchase on the Michigan Opera Theatre’s website.

The March 18 opening night performance will be dedicated to the memory of a Michigan Opera Theatre trustee, the late Dr. Kim Lie who was an active patron and advocate of the arts. From volunteering with the Dance Council, Michigan Opera Theatre Volunteer Association and the Opera League to supporting other local institutions like the Detroit Symphony Orchestra and the Detroit Institute of Arts, Lie’s contributions gave life to the art he loved and cultivated in his community.

For basic details on A Cinderella Story at the Detroit Opera House, see the Metro Parent calendar listing.