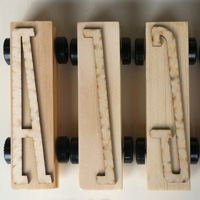 Tucked away in the back of Atwater Brewery in Detroit last week, cheers and laughter could be heard far away as AIGA Detroit’s Greased Up Pinewood Derby took to the tiny racetracks. Thanks to my younger brother, I’ve attended many Pinewood Derbys in my day – but never had I been to one with so many fantastic-looking cars created by some talented metro Detroit folks.

If you’ve never built your own car or attended a derby, the Pinewood Derby is a long-standing Boy Scouts tradition dating to 1953. Using basic woodworking tools, scouts create cars with the hopes of achieving high speeds once they hit the track. Not only should the car be fast, it should be good-looking, too! When AIGA Detroit, a professional association for metro Detroit’s creatives, wanted to hold their very first derby, they knew they had multiple resources around town to look to for help with the car creation.

Last fall, AIGA Detroit turned to local hackerspaces Omnicorp Detroit and i3 Detroit (the creative forces behind our DIY water rocket) for inspiration. Members got a chance to learn about the spaces and work on their cars as the big day quickly approached. AIGA Detroit also worked with a local Boy Scout troop to create their very own track for the event.

Fast forward to Jan. 19. I was so impressed with the variety of cars racing during the inaugural event, from retro rockets to wedges of cheese. Manning the track that night were father-and-son duo Craig and Harrison Steen of Rochester. Craig, who runs AIGA Detroit’s shop program, was the master of the track, setting up the cars for each heat, while Harrison ran back and forth retrieving cars all night long. This combo was definitely the group to know that night!

Not only did participants race their cars that night, they also auctioned off show cars for AIGA Detroit’s youth charity, Shout!

So, what if you’ve got a scout at home getting ready for an upcoming Pinewood Derby? Here are a few tips from some of AIGA Detroit’s participants to get your car ready for the track.

Clint Zadorsky of Royal Oak found out about the derby while attending the Detroit Urban Craft Fair in December. He and his friends worked long days and nights leading up the to the race. His tip for future carmakers? “Just have fun with it! This is all about fun.”