Is American Idiot Fit for Teens? 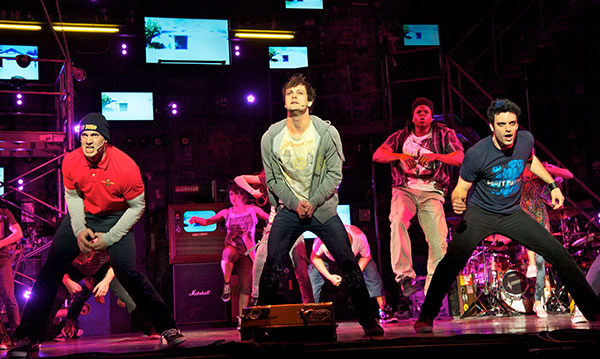 Between the deluge of animated films, ice shows, circuses and zoos, finding a fun activity for you and your little one to enjoy together is almost too easy, but planning an outing for you and your teen can prove to be a much more daunting task. Which is why I can understand how parents might be intrigued by Green Day’s American Idiot, the Broadway hit musical that just opened at the Detroit Opera House on Tuesday, Jan. 17. Theater and culture disguised by punk rock and young adult angst seems like a genius ploy to get your kids to spend time with you in public (and to score some scarcely awarded “cool points”), but be forewarned, this is more Rent than Rodgers and Hammerstein.

The story, told almost exclusively through the music of punk rock band Green Day, follows three boyhood friends as they struggle to find their place in post 9/11 America. From the moment the curtain rises on the garage-like set featuring 30-plus flickering TVs, you are captive to the emotional highs and lows that catapult you through each scene, leaving you breathless (and nearly blinded by the intense light show). There’s drugs, sex, rage, love, foul language and lewd hand gestures, which you may feel is inappropriate for your teen (although they have most likely seen much worse in the last R-rated movie you rented). I overheard one elderly mom describe the show by saying, “the energy is undeniable, even if some of the scenes were slightly… disturbing.” Basically, if you are uncomfortable discussing or hearing these topics discussed with your teen in the room, this show might not be for you.

That said, I strongly urge you to consider going. I found the rock concert take on the traditional musical a refreshing reprieve from the Von Trapps of yesteryear (no disrespect to the great Julie Andrews and company). What better way to introduce your child to theater than through his or her own music? And yes, some of the scenes are slightly graphic, but they send a powerful message that the youth of today can certainly relate to. Plus, it provokes conversation on some pretty important choices that teens face. I say, be brave. While I can’t promise that you won’t still get some major eye rolls, she definitely will not leave saying that was “soooooo lame!”