At Home With the McAllisters: Mom and Dad Radio Show

This Grosse Pointe Woods couple launched a radio show right in their basement. Here, they offer the behind-the-scenes scoop on their new gig. 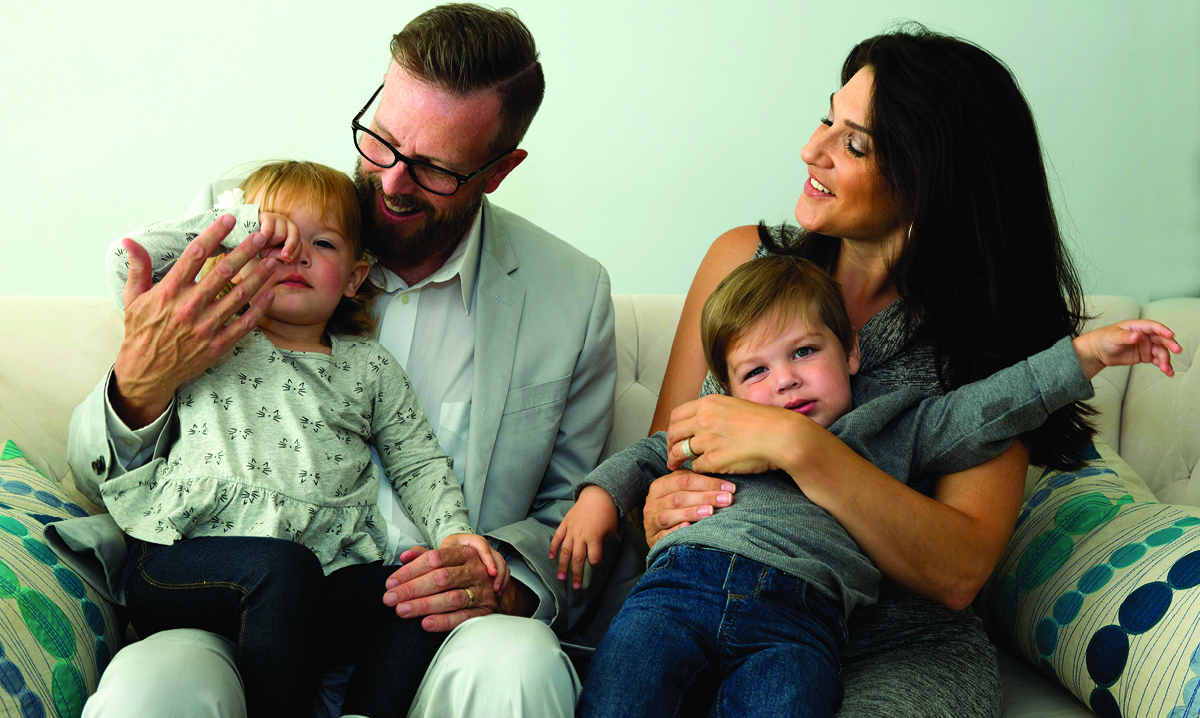 Bill McAllister and Danielle Carlomusto have one jam-packed house. They juggle 2-year-old twins Marco and Amelia, a hyper border collie terrier mix named Maple and “extremely chill” beagle Biscuit – all while broadcasting live from their Grosse Pointe Woods basement two hours a day, five times a week. Their show, At Home With the McAllisters, recently launched on Farmington Hills-based New Radio Media, an online platform that merges talk radio with streaming video. It’s definitely a change for these industry vets – Bill is a former 97.1 radio personality while Danielle’s a singer (they met when she was on his show). The dynamic duo chatted up the behind-the-scenes scoop on their new gig.

“It’s like a little date away from the kids,” says Danielle. “It’s difficult to get time away, and we get two full hours together each day.” Getting “camera ready” was a trickier adjustment. “The only con is that I come from radio, and I could essentially wear a bathrobe,” says Bill. “Now, I have to dress up each day.” Danielle adds, “Once the show is over, I’m in my Old Navy yoga pants!”

“The idea behind the show is a metro Detroit couple talking about what you would talk with your coworkers about,” says Bill. “It’s about real-world problems.”

They’re inspired by daily life and the latest news and entertainment. It takes some focus, so one watches the kids while the other comes up with topics and vice versa.

“We love that we have twins, but there’s no down time,” says Bill. When they go live, fortunately, a neighbor steps in as nanny.

While the tots are mostly content watching The Wiggles, “Once in a while, the kids realize we’re just downstairs and they can get more attention,” admits Danielle.

A random dog bark is inevitable – or loud toddler noises from above. One time, “I had to go upstairs because there was a piercing scream,” says Bill. “It was something very dramatic,” Danielle explains, “like Marco stealing Amelia’s milk.”

“I would describe it as hanging out with your neighborhood friends, because we’re metro Detroiters, just like you,” Bill says.

Since they launched in late March, one of Danielle’s highlights was discussing bad parts of good movies, like “in Willy Wonka, during the psychedelic boat ride.”

Bill’s partial to his self-defense episode. “I did jiujitsu” – or his form of it, as he’s never practiced martial arts. “It got over 2,500 views.” And they all love “food week” shows, including a recent focus on cheese balls and animal crackers. “The kids were excited about that,” Bill says.

At Home With the McAllisters airs 8-10 a.m. Monday-Friday. Stream live or watch on demand at newradiomedia.com or on the NRMstreamz app.