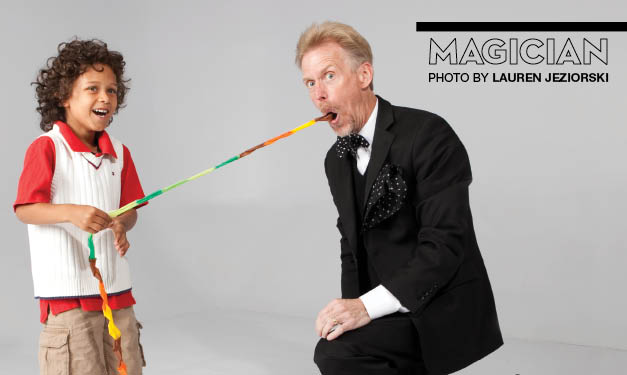 At a recent school assembly, while making his assistant levitate, Bill Schulert (aka Baffling Bill the Magician) heard a young boy exclaim with wonder, “Wow! That’s real magic!” With that single declaration, Schulert knew the show was a success.

“One reason this business is not tiresome to me is the feedback I get from kids,” says the full-time magician from Lake Orion, who performs in the neighborhood of 500 shows a year. “They’re real. It’s hard to read adults, but kids, they let you know right away. They gasp. Their jaws drop. Their eyes become like saucers. As a magician, it’s always gratifying to see that.”

Schulert has been performing magic in libraries, school gymnasiums, private residences and on stages at festivals since 1986. Ninety percent of his work is for child and family audiences, providing him ample opportunity to work with and for children, gleaning insights into how their little minds tick.

Once after performing a show at the Horton-Colwell Opera House at Crossroads Village in Flint, was approached by a young boy who noticed something slightly off about a new illusion that the magician had performed.

“He caught this tiny detail that enabled us to change up the illusion going forward,” Schulert recalls. “It was so minor, but kids notice these things. It saved me years of not performing the trick right.”

While much of his work is rewarding and fun-filled, it does offer its challenges.

“Like TV killed vaudeville, magic is in a tough time now,” he says. “There used to be a time where if you wanted to see David Copperfield perform, you had to watch his show the one night it aired on television. Now YouTube makes it all so accessible. People don’t regard it as special like they once did.”

This point was brought home recently while Schulert was performing the famous ring trick at a birthday party. In the middle of the trick, Schulert saw one of the dads looking up how the trick was performed on his smartphone.

“I knew what he was doing and tried to stay ahead of him,” he recalls. “It’s my goal to transcend the magic. Once you get past the tricks, you can experience the real magic, like that little boy did when he saw my assistant levitate. A lot of kids don’t want to know how a trick was performed, and I appreciate that.”

Other essential skills: Truck driver, lighting and sound technician, mover and marketer. “There is lots of work involved in bringing a show to life. Setup for a 45-minute show typically takes three hours and teardown one-and-a-half hours. Sometimes I’m driving up to six hours to get to a show. There are certainly many easier ways to make a living.”

Favorite part of his job: “Joy and laughter are the best parts about working with kids. It feeds your soul. I’m so lucky to be able to do this. I get instant feedback. It’s incredible.”