We love how these local parents went theme-crazy to celebrate their kids’ birthdays. Let their creativity be your inspiration. 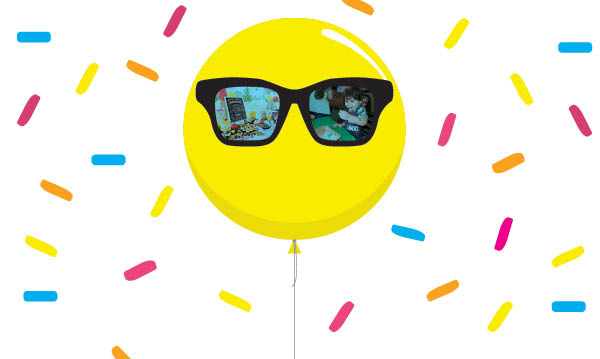 You know the saying “less is more”? Well, it doesn’t apply here.

While some parents opt for the simpler side when it comes to planning their kids’ birthday parties, others are going all out with themes no one would’ve expected. Because themes aren’t just princesses, pirates or cartoon characters anymore. They trend toward the unique and sometimes the ironic, with parties themed around Target (yep, the store) and even poop (think emoji) going viral over the past year.

So we asked some Michigan parents to brag about the most Pin-worthy parties they’ve pulled off for their birthday boys and girls – and, we have to say, we’re impressed. Check out these shebangs and get inspired to do something different for that next b-day bash, or tell us about your own amazing affair and we may show it off on our Instagram or in an issue of Metro Parent!

Names: Stephanie and Samy Aburashed, mom to Moody (14), Kareen (12), Aaliyah (6), Maysa (5) and Hani (2)
City: Okemos (near East Lansing)
Party theme: Dinosaurs
Birthday: Aaliyah, Maysa and Hani (sibling party)
Details: “I like to pick a theme and try to make as many details of the party a play on this theme – from the décor and activities down to the favors and food,” says mom Stephanie.

“We had ‘carnivore’ (dino-shaped chicken nuggets) and ‘herbivore’ (assorted veggie cups), ‘dino eggs’ (sour patch green grapes), ‘molten’ brownie volcanoes. Our activities included a dino egg hunt with eggs stuffed with chocolate, tattoos and stickers. We used vinegar to ‘hatch’ baking soda eggs with mini dinosaurs hidden inside. There was a ‘dino dig’ where kids used shovels and paintbrushes to uncover dino skeletons. For our party favors we gave out dino bath bombs with mini dinosaurs inside.”
Party highlight: “Probably the hatching of the baking soda eggs. The kids truly enjoyed all the activities.”
Any advice? “I wouldn’t make any changes to the party – except maybe wait until the last minute to lay out the dino eggs for the egg hunt if you’re putting chocolate inside!” 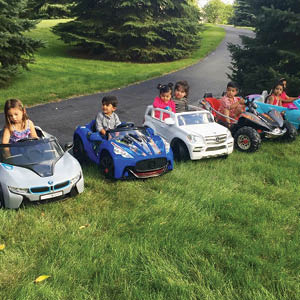 BABY, YOU CAN DRIVE MY CAR

Names: Anam and Yousuf Taufiq, parents to Miraj (2) and Amira (1)
City: Rochester
Birthday: Miraj’s 2nd
Party theme: Car show
Details: “My son is car obsessed, so it only made sense for his theme to revolve around cars,” says mom Anam. “I did not want to do the usual Disney Cars theme so we changed it up!” The family rounded up several Power Wheels cars – Miraj had two, and they borrowed a few more

from friends – and set them up like a car show. At the party, kids took turns test-driving. “Our house has a trail in the backyard so we designed it to look like a track. The kids had a blast! They followed each other down the trails, and those that weren’t confident driving one sat as passengers.”
Party highlight: “In order to drive, everyone needed a license. I asked the parents ahead of time to send me a picture of their child. Every kid received a Michigan ‘license’ to wear,” Anam says. “Everyone absolutely loved the party favors. Most of them still have it in their rooms. It really is a party favor they can keep over time versus a bag of candy.”
Any advice? “I originally wanted to save this for his turning 3 party; however, all the kids surprised me with how well they did sharing the Power Wheels, letting each other try it out, building friendships and socializing.” 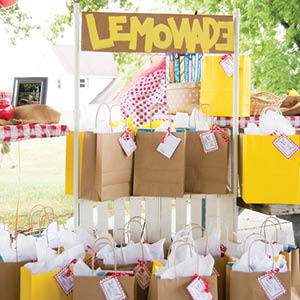 A PICNIC AT THE PARK

Names: Andrew and Ashley Skolas, parents to Aria Drew (3) and Alessia (8 months)
City: Macomb Township
Birthday: Aria Drew’s 3rd
Party theme: Picnic at the park
Details: The party was held at Wolcott Mill Metropark Farm Center, where guests could roam the farm, pet the animals and return to the pavilion for food and dessert. “I decorated with red gingham table clothes, yellow flowers and photos of the birthday girl,” mom Ashley says.

“I used baskets, crates and doilies for a country/picnic feel. The kids enjoyed a visit from Elsa, which included face painting, singing and balloon animals. Then, they took home a goodie bag of snacks, a coloring book, Play-Doh and bubbles.”
Party highlight: “Everyone always seems to love a good sweet table, and they like being able to take sweets home,” she says. In addition to the dessert table, the venue went over well. “They could enjoy the park/farm at their own pace, and that worked well for lots of busy children of different ages. It made for a more relaxed feel for our guests.”
Any advice? “Photography is a hobby of mine, and I love it, but when I’m busy taking pictures I feel like I miss out on a lot. Afterwards, though, I am so grateful for the memories I captured. My suggestion would be to designate someone to take photos for you. For first birthday parties, hiring a professional photographer is so worth it, but that can get super pricey year after year.” 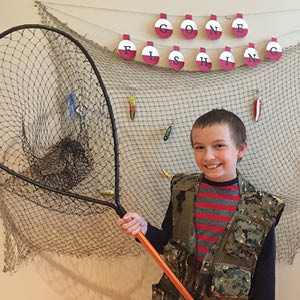 Names: Missy and Dean Varton, parents to Elizabeth (13) and Noah (12)
City: Canton
Birthday: Noah’s 12th
Theme: Fishing
Details: “I really wanted to make it as ‘fishy’ as possible,” says mom Missy. “I searched the internet and found tablecloths that looked just like water. Then we scattered real seashells around the tables.”
Using a Cricut machine, she cut out “bobbers”

and letters to make a front-door sign saying “bob on in” and a “gone fishing” sign with a fish net for inside. “Then my son added some of his real fishing lures around the fish net we hung,” she says.
For food, colored Goldfish crackers were “rainbow trout,” Swedish Fish and gummy worms “live bait,” tuna salad with shell pasta “catch of the day” and rippled chips plus dip “fish scales and seaweed dip.”
“When we served up our ‘lake water’ (blue punch), we placed a red fish ice cube in the glass. I also wrapped up blue silverware in a napkin and tied it with string along with a mint lifesaver.”
Party highlight: Dad Dean makes the cakes, and they’re a hit. “This year, he frosted the cake in two colors for water and land, made a dock and boat out of graham crackers and chocolate and added lots of fishy details.”
Any advice? Buy party décor as you see it – even if it’s months early. “I’ve learned when I go to look for it later, I won’t be able to find it.” 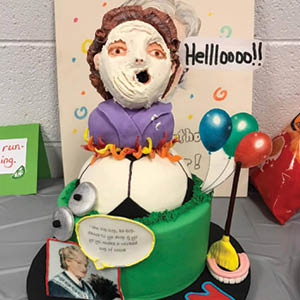 Names: Laura and Jason Kowalski, parents to Ethan (12), Allison (7) and Evan (4)
City: Wyandotte
Birthday: Evan’s 4th
Party theme: Mrs. Doubtfire
Details: “Evan chose the theme himself,” mom Laura says. “The food was pizza. We also set out a fruit salad and fruit kabobs with a sign with the infamous line from Mrs. Doubtfire, ‘It was a run-by fruiting!’ For goodie bags, I used plain white bags and glued a picture of Mrs.

Doubtfire to them and hand wrote, ‘Thank you for coming, dear!’ on each one – Mrs. Doubtfire referred to everyone as ‘dear.’” The décor standout, she says, was an “amazing hand-drawn Mrs. Doubtfire done by my cousin, John Hundley, who is an artist. He wrote on it, ‘Happy Birthday, Evan dear!’”
Party highlight: “The cake, done by Angie Claxon from Cakes by Sweetypants. I found her on a local Facebook group, Downriver and Friends, and it stole the show. It included highlights from the entire movie. When I brought it out, my guests swarmed the table to take photos. It was amazing.”
Any advice? “If I could do it all over again, I would start planning sooner so I could be more prepared. Initially I turned to Pinterest and Etsy to help me plan, and there weren’t any ideas there (apparently no one has had a Mrs. Doubtfire party before. Who knew?). However, I never in a million years anticipated my preschooler would choose this as his theme, so how was I to know I’d need months to plan? Our guests are still talking about it, though, so everything was so worth it.”

Do you think your kid’s bash has what it takes to knock one of these bangin’ blowouts out of the top spots? Tell us about it and you could see your party on our Instagram or even in an upcoming edition of Metro Parent!