Books About Farts That Kids Will Love

Farting is funny and everybody does it. These new toot-filled tales will teach pint-sized pooters about their gases and give laughs to older kids, too. 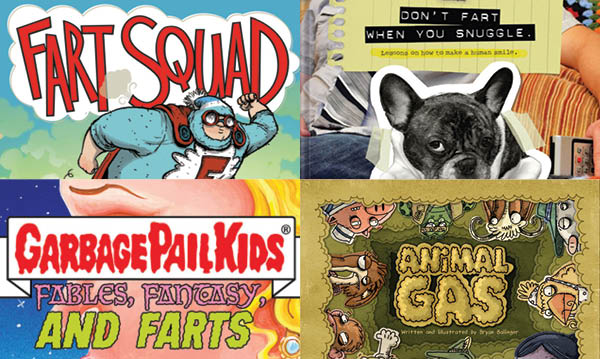 Something smells in Buttzville. Kids at Harry Buttz Elementary are getting sent to the nurse’s office with explosive gas! Can Darren, his three friends and Janitor Stan release their “potty powers” to get to the, uh, bottom of this evil plot? $4.99. HarperCollins, 2015. Ages 6-10. Hint: Stay tuned for Fart Squad #2: Fartasaurus Rex, due out Sept. 1!

Don’t Fart When You Snuggle

By “From Frank” (with help from Kate Smith)

Frank, a French bulldog from Lafayette Indiana, takes a look at the bond between pet and parent through photos and wit in his doggy self-help guide. The popular greeting-card pup teaches fellow pooches when and when not to fart – plus other behaviors to keep their families smiling. $12.95. Chronicle Books, 2015. All ages. Out Aug. 4.

Written and illustrated by Bryan Ballinger

The one that smelt it dealt it! This picture book explores the idea that farts only stink if you’re on the receiving end with a parade of animals that describe their own lovely broken wind, only to be shot down with the reeking truths from the animal behind them. $12.95. Sterling Children’s Books, 2015. Ages 3-7.

Written and illustrated by Shannon Wheeler and others

Join the trading card-famous Garbage Pail Kids as they take a “breathtaking” journey to flatulence-filled worlds, fairytale lands and fart-y frontiers in this comic book, suggested for “immature readers.” $3.99. IDW Publishing, 2015. Ages 13-plus.