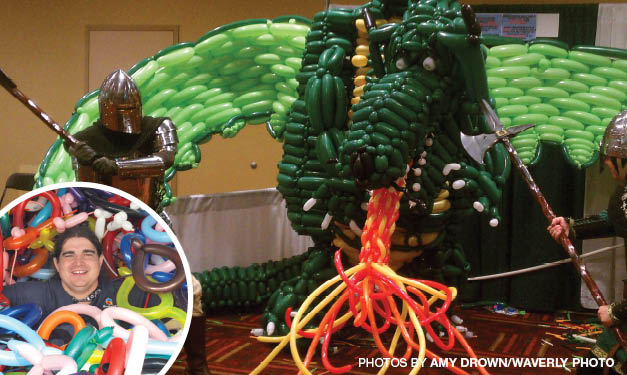 Give Tim Thurmond a bag of balloons, and you’ll witness artistry unlike anything else. Just don’t expect to receive the average poodle.

Instead, “The Balloon Sculptor,” as Thurmond’s become known, creates intricate 3D latex works of art. His repertoire includes a 15-foot-tall dragon, life-size superheroes, a recreation of painter Vincent van Gogh at work, and Leonardo da Vinci’s The Last Supper – among others.

“When it came to the balloons, things just kind of took off and my creativity was able to shine,” says Thurmond, 32. “I was able to really embrace it.”

And when it comes to ballooning, this Brighton guy sets his sights high.

In mid-July, he attempted – and shattered – his own Guinness World Record for most balloons blown up by mouth and twisted into animals in 24 hours. He completed 8,298 balloons in the allotted time. He blew his first record out of the water (6,176 balloons in 2004). In addition, Thurmond broke the three-, six- and 10-hour world records that had stood since the 1990s.

The quest started earlier this year, when a man in Texas beat Thurmond’s old record by 55 balloons. But it wasn’t properly documented. So the Texas gent encouraged Thurmond to leave little doubt as to who the record holder should be.

“It’s about 25 percent physical, but a lot of it is mental,” Thurmond says. “When you feel that you can’t go any further, you just keep pushing yourself.”

See The Balloon Sculptor in action almost every Friday at the Bennigan’s restaurant at 3950 E. Grand River Ave. in Howell, starting at 5 p.m. Learn more at TheBalloonSculptor.com.

Ballooning has been a blessing to Thurmond, who says he was bullied and made fun of a lot as a kid because of his weight. (Later in life, he pushed himself to hike 800 miles of the Appalachian Trail.) He says he’s always been an introvert and a behind-the-scenes-type person.

“I still enjoy my quiet time. That’s always going to be part of who I am,” says Thurmond. “At the same time, balloons are a part of my identity. When I first meet people, that’s when it’s hardest for me. But when I make that first balloon for someone, it immediately breaks the ice.”

He first discovered his bent for balloons when he went to clown school at age 9. Performing physical comedy was fun. But what intrigued Thurmond most were balloons. It was there he made his first balloon animal – a dog. Constructing something made sense to a young boy who loved to build with giant-sized Tinkertoys.

He learned juggling, chalk art, magic and puppetry. But Thurmond still didn’t quite connect to any of it – until the last day. The topic was balloons. Up until then, he’d still only made that one dog, so he tried a beginner class. He didn’t stay long: The camp leader came over, snatched Thurmond up and switched him to advanced. The next year, Thurmond taught the advanced class.

“All I knew at the time was that, with a balloon in my hand, something had just clicked inside me,” Thurmond says. “It was like I woke up and realized I was doing something I really loved.”

The looks on the faces of the children Thurmond creates his masterpieces for is priceless, too. He loves to encourage the kids to be creative and challenge him to make something extraordinary. Besides ballooning for private and corporate events, Thurmond can be found twisting at Bennigan’s in Howell Friday nights.

“To see the amazement in a kid when you make a balloon bigger than themselves means a lot,” Thurmond says. “The overall experience, the smiles, the laughter … it’s all of those things.”

“One thing I’ve noticed is there’s something in every one of us that gets triggered by a balloon,” says Thurmond. “Most people have received a balloon at some point in their childhood, and it’s related to a happy experience. When adults see the things I make out of balloons, it brings them back to that moment. You can see it in their eyes. They don’t even understand why they’re so drawn to it, and it’s so fun.”

Thurmond continues to challenge himself and hopes to make a life-size, 60- to 80-foot-long version of a giant squid, incorporating his early love of oceanography. He also wants to construct King Arthur and the Knights of the Round Table.

As for the world of ballooning, it’s alive and well.

“Balloons are just exploding like crazy,” Thurmond says – no pun intended. “I wish the guys who taught me were still around to see how far balloons have come. We’re seeing that anything is possible with balloons.”

Number of balloons blown up (by mouth) in 24 hours: 8,298
Favorite sculpture to make: New things that haven’t been made before (especially the large pieces)
Least favorite: Basic balloon dog
Kids’ favorite/most-requested: Cars and princesses
Strangest request ever: A 10-eyed turtle

Favorite big sculpture: Leonardo da Vinci’s The Last Supper or the giant fire-breathing dragon
Favorite reactions from the recipients: The smile on kids’ faces and the amazement in the parents’ eyes
Hero: Joe White and other “giants” of the balloon world who I met in the Fellowship of Christian Magicians
Share
Facebook
Twitter
Pinterest
Email
Print

Michigan's Adventure opens May 27, 2022. Learn more about the park's attractions, ticket prices and everything you need to make the most of your trip.
Read more
Guides

Coolest Caves in the Midwest for Michigan Families to Visit

These caves in the Midwest are great vacation destinations that give local parents and kids a truly underground family experience!
Read more
Tweens & Teens

A lot's changed since you ran with your friend crew. Research now finds 12 distinct high school cliques. Learn about them and where they rank in the hierarchy.
Read more
Health

The Clarkston mom is raising awareness for Tourette Syndrome after her son was diagnosed with the nervous system disorder.
Read more