Tips to Teach Kids How to Build a Campfire

Blaze a new trail for your kids by teaching them how to build a campfire, from safety to creating the perfect pyramid, all the way to putting it out. 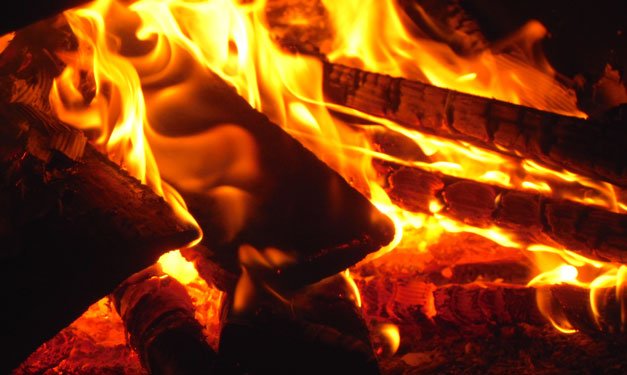 Lighting a campfire sparks warm memories for Chris Gay of Allen Park. Many camping trips have taken place out in the starlit woods with her family, toasting marshmallows and swapping stories. And a big part of that tradition has included teaching her kids how to build a campfire.

“It’s the bonding,” says Gay, who, for over 20 years, was a Girl Scout leader and camp volunteer in metro Detroit. “It’s a nice time to sit around, sing songs, tell stories. You just chitchat and enjoy.”

She’s taught hundreds of local girls – including hers, who are now grown – how to build a fire. At the metro Detroit council’s Camp Innisfree near Howell, where she served as summer assistant director, Gay trained the counselors who show fifth-grade girls how to create basic “A-frame” fires. So she knows a thing or two about making a fire.

Even if you’re not out in the woods all that often, with proper guidance, learning how to build a campfire can be a great lesson for kids in the areas fire respect and caution, Gay says. At very least, it’s a handy barbecue back-up plan if the lighter fluid runs out – and a way to build family memories of your own. So, whether you’re planning a bit of Michigan State Park camping or backyard fun, read on to learn how to build a campfire.

At any age, setting down some fire pit safety rules is lesson No. 1. “You don’t play around the campfire,” Gay says. “You don’t run. You don’t pass things around.” Clothing should be fitted; no hoodies with loose strings, or nylon, which is highly flammable. The ground itself is important, too: Within three to four feet of a campsite fire pit, rake away any leaves and branches, which stray cinders could ignite.

This distance also is where chairs or benches should be placed – and, Gay adds, make it clear, “The only time they come up to (the fire) is for cooking.” Remove old coals, clean off cooking grates and always have a bucket of water nearby.

Next, scour the forest floor for branches. Even toddlers can help collect the three types of fallen bramble: “tinder,” or tiny pieces as skinny as toothpicks and 3 to 8 inches long; “kindling,” about the width of a pencil and also 3 to 8 inches in length; and “fuel,” as thick as a wrist and roughly a foot long.

“In Girl Scouting, we basically use what Mother Nature provides,” says Gay, who doesn’t use lighter fluid. She also nixes crumpled newspaper, since it’s light and often floats away from the fire – which could catch a nearby tree or child.

Good burning wood must be dry, she adds. Test pieces by breaking off a small bit and listening for a crisp snap. And watch out for sap, says Gene Navilys, who has served a Boy Scout master with Troop 1318 in Detroit. When one of his boys once picked up a sticky stick, Navilys tossed a piece of it into the flame for a startling demo: “He was very surprised to find out that wood exploded!” Place all that firewood into separate piles in a “staging area” that’s a safe distance from your pit.

Stacking wood into structure can get tricky. So, with beginners, Gay teaches a simple “A-frame” method. Take two pieces of “fuel” and lay them flat on the ground, into a “V.” Place a third piece of “fuel” across the other two, to form a capital “A.” This “crossbar” should face toward the wind. Next, arrange kindling in the top portion of the “A”: Each piece should lean diagonally from the ground up onto the crossbar. In the same fashion, lean the tinder on top of the kindling.

Age 11 or 12: That’s the earliest kids should attempt striking a match, Gay and Navilys agree. “Again, stress proper supervision,” says Gay. Avoid matchbooks, which are small and flimsy, and opt for longer, sturdier wooden kitchen matches (the “strike anywhere” type, available at hardware stores, are a extra-easy alternative, Navilys notes). Always instruct kids to strike the match away from their bodies. Once the match lights, hold it to the “underside” of the leaning kindling until it catches; then, let it drop.

No crackling fire is complete without a few campfire songs, your best s’mores recipes – and a “monitoring stick.” Hardy and 3- to 4-feet long, it’s used to push in branches and twigs that fall from the main flame, Gay says. Keep an eye on any red-glowing flyaway embers; they’ll often “die” on their own, but might need a quick shoe stomp. If the fire dwindles, slowly feed in additional fuel – close to the ground and at a safe, arm’s length distance – until the ends catch fire, Navilys says.

Extinguishing your campfire is perhaps one of the most important safety steps of all. “Please, don’t take the bucket (of water) and throw it on,” Gay cautions; that’ll just end in thick plumes of smoke. Instead, flatten the fire as much as possible with the monitoring stick. Then, carefully pour on water until you feel no heat when hovering your hand about an inch above the coals.