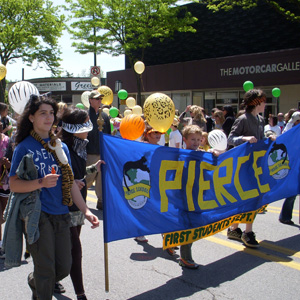 Get your family together to kick off the summer at the annual Celebrate Birmingham Parade in Shain Park on May 19, 2013. Don’t miss out on this year’s theme: red, white and blue!

The parade features the Whiskers and Waggles Pet Parade, back this year by popular demand. Children will show off their beloved furry friends in the parade. The parade also features an array of fire trucks, police motorcycles, antique cars and floats. The parade welcomes local community groups, school groups and businesses to add to the excitement. Don’t miss out on the salute to our veterans at 2:30 p.m., in honor of those that serve our country.

The Celebrate Birmingham Parade is a long-standing tradition, creating excitement all over the city for the last 50 years. Gather up your kiddos and make memories at this exciting family tradition.

The parade begins at 1 p.m. on Sunday. The parade starts von South Old Woodward Avenue at Daines Street. It will travel north on Old Woodward, west on Maple and south on Bates – and the park activities will take place at Shain Park at the end of the parade route. The fun is free, too!