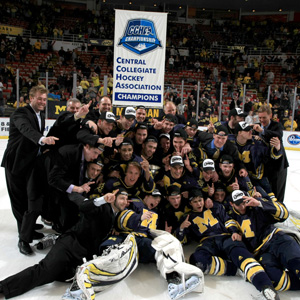 The Red Wings are hot. But this weekend, Hockeytown gets fired up over some different players during the Central Collegiate Hockey Association Tournament, making its way to the Joe Louis Arena in Detroit taking place on March 16-17, 2012.

Four teams have duked it out to land a spot in the championship round, but only one can win. So who will it be? The Mitten State boasts two teams playing in CCHA Tournament this year – Western Michigan and the University of Michigan. Kicking off the competition, Western combats Miami, while Michigan takes on Bowling Green University.

You and your family can watch the ice-slinging, puck-flying action as it unfolds over two high-throttle, fun-packed days. Throughout the championship, 11 fans will win one-of-a-kind autographed jersey combinations from CCHA alumni – all of whom are now in the NHL.

The puck drops at 4:35 and 8:05 p.m. on Friday, March 16. In the first game, Miami takes on Western, followed by a face off between Bowling Green and Michigan. Then, on Saturday, March 17, the teams who have won the semifinal games advance on to compete in the third place game at 3:35 p.m. and the final game at 7:35 p.m.

Tickets for the main events range from $10 to $65. Special family four packs – complete with four tickets, four slices of pizza and four soft drinks – are available for $44.

See the Metro Parent listing for more on the 2012 Central Collegiate Hockey Association Tournament at the Joe Louis Arena in Detroit.