Circus 1903 at the Fisher Theatre in Detroit 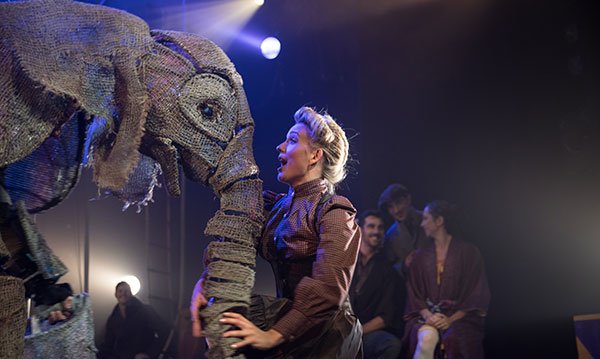 Get a view of expert puppetry, acrobats and jugglers under the big top at Circus 1903, an old-timey circus experience at the Fisher Theatre in Detroit offered March 14-19, 2017.

The minds behind the world’s biggest magic show The Illusionists and the expert puppeteers behind the play version of War Horse have come together to create the family-friendly ode to circuses of the past.

The production is also a more humane take on the traditional circus, as all the circus animals have been replaced by “carefully constructed and realistic” puppets, according to the show’s website.

The creative producer of the show, Simon Painter, said in a promotional video that the inspiration for Circus 1903 came from the circuses of the past that were enormous productions and featured dangerous acts and had animals “at the forefront of the show.”

“We’re really trying to bring the most exotic acts that people haven’t seen and really emulate exactly what circuses did at the turn of the century,” he says.

Director Neil Doward added: “I’m really excited for the audience to see how beautiful circus was back at the turn of the century.”

The Circus 1903 show will feature many of the same elements from the circuses that inspired the show, but with a modern twist. The beloved circus elephant has been replaced with expertly crafted elephant puppets operated by multiple puppeteers, for instance.

Painter says in the video that the reason he chose to bring elephants back to the circus is because “they are the classic, grandest and most overwhelmingly amazing creatures you’d ever see at a circus show … For me, it was really about the emotion and bringing these animals to life onstage.”

Visit the Circus 1903 Facebook page to watch behind-the-scenes videos of how the elephant puppets were made. For basic details on the show, see the Metro Parent calendar listing.