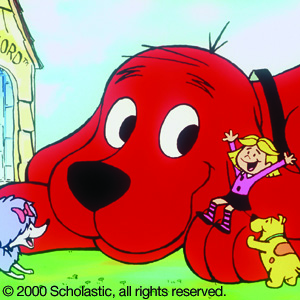 For a big red dog, a little love goes a long way. See, this pup used to be the runt of the litter – that is, until a young girl named Emily Elizabeth chose him to be hers. And, thanks to his doting new owner, Clifford the Big Red Dog grew to more than 25 feet tall!

That's the very first story of Clifford the Big Red Dog, written in 1963 by Norman Birdwell. The book followed this endearing young girl, who picked out Clifford from the litter of puppies as her birthday present. All because of her love, Clifford grew and grew and grew. In fact, ultimately, it prompted her family to relocate to Birdwell Island to give this pooch room to roam.

Since the first book was written in the early '60s, Clifford has been on adventure after adventure – leading him from books to TV screens and, now, to the stage in Clifford the Big Red Dog Live.

The musical is ready for its southeast Michigan close-up at the Michael A. Guido Theater of the Ford Community & Performing Arts Center in Dearborn on Saturday, March 17, 2012. The curtain goes up at 4 p.m., and families with kids ages 3-7 can follow Clifford and his gang on a brand-new journey – where they'll learn all of Clifford's Big Ideas, including sharing, playing fair, being truthful and believing in yourself.

Want to see the show? Purchase tickets online: They range in price from $24 to $55.

See the Metro Parent listing for more on Clifford the Big Red Dog Live at the Ford Community & Performing Arts Center in Dearborn.