Creating a Kingdom for Imagination With Spoiled Rotten Homes 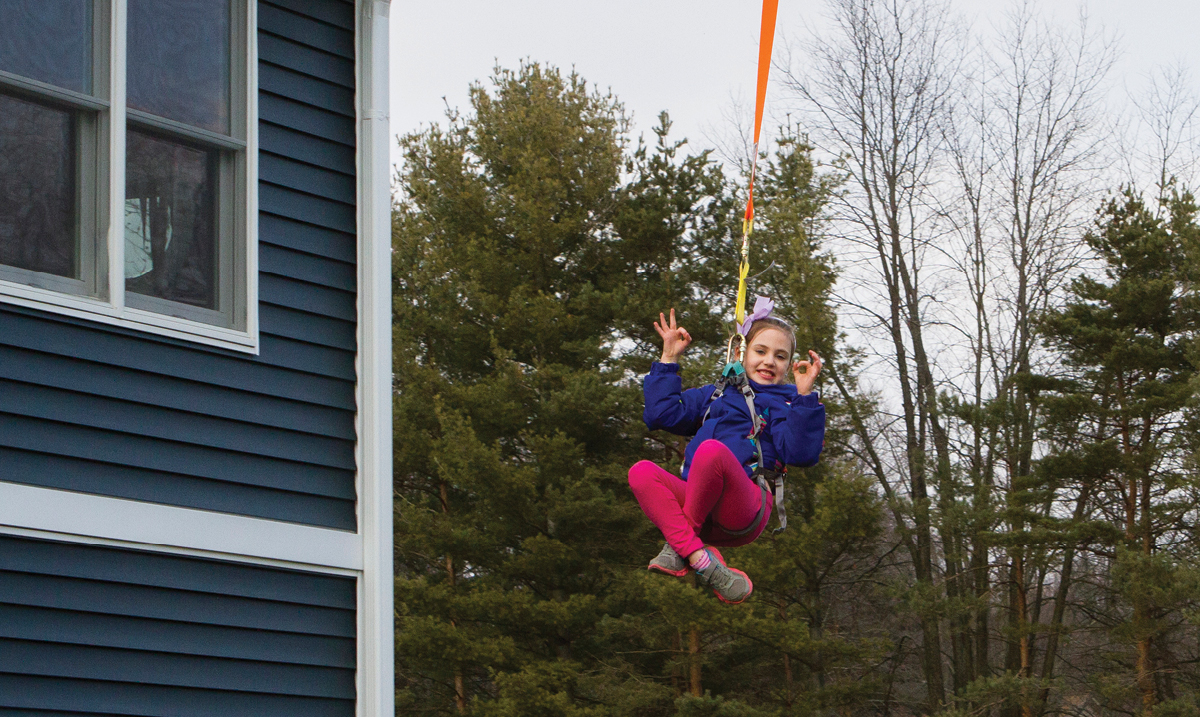 Adam Boyd doesn’t recall the exact moment when he got the idea to build his two daughters a playhouse, but he does remember why: He wanted a spot for Avery, 5, and Violet, 2, to spend their afternoons, weekends and summers embracing their imaginations – and playing together. The Highland dad even thought it might grow into a place where they’d invite their friends over to hang out as they got older.

The endeavor became a labor of love for Boyd, who worked evenings and weekends to finish the project. He also made sure to involve his daughters – friends and co-workers volunteered time, too. The result was a two-story marvel with eight-foot ceilings, a twisting slide from the second floor, two rock walls, porches and little personal touches that he finished in the summer of 2017.

While the deluxe playhouse has won rave reviews from friends – and even the media – Boyd’s most excited about his girls’ reaction. “They love it,” he says. “I think they spent most of their summer last year playing in it.”

And with a brand-new zip line he just installed, that trend is sure to continue in the months ahead.

The playhouse started with remnants. “My wife’s aunt had a playset in the backyard and her family outgrew it, so they gave it to us,” explains Boyd, who’s also president of Highland-based ATB Building Inc. – and a newer kids playhouse venture he’s dubbed Spoiled Rotten Homes (more on that in a bit).

Boyd came across other materials as part of his job and as he was driving around for work. That’s how the playhouse scored its slide – dad found it on the side of the road. Porch and roof materials were extras from other construction projects. And the doors? Boyd noticed a local restaurant was getting rid of them and asked if he could have them.

Of course, he also purchased plenty of stuff, but part of the playhouse’s charm is how all the pieces and parts came together along the way.

Over the year it took to build Avery and Violet’s playhouse, Boyd looked for ways to involve his daughters.

“Avery would get so excited to help,” he recalls. “There was a lot of daddy-daughter time. She helped me with sanding the table. I taught her how to use a drill gun and she’d put in screws. When it came to cleaning, she had her own little set she’d use.”

Avery also picked the paint color she wanted in the playhouse – she opted for a deep purple. And Violet? Since she’s still too little to help out much, Boyd and his family decided the most appropriate shade would be, of course, violet.

Boyd’s sister Rachel Goldsworthy, who owns photo business Flashes of Life Photography, offered to take pictures of the playhouse – and the girls enjoying their new digs. Boyd shared the images on his personal Facebook feed and so did his wife, Jennifer.

The post quickly racked up shares, so Boyd figured he’d also pop it on his business’s Facebook. It sprang from 600 shares to 6,000 within five hours, skyrocketing into viral territory and culminating with ABC News doing a piece on the deluxe playhouse. “Then the whole thing just went bonkers,” Boyd says. “The story ended up getting shared all over, in places like Paris, the U.K., Brazil, Vietnam. It was surreal. It’s been a once-in-a-lifetime experience.”

Why did it resonate? “I think it was just the fact that I did it for my daughters,” Boyd says. “Certainly, it wasn’t the nicest playhouse that’s ever been built, but it was the reason I built it.”

Boyd’s social media celebrity opened up fresh possibilities, including building playhouses for private residents as part of Spoiled Rotten Homes – and one for the Highland Township Public Library (they’re in the beginning stages of planning right now, including raising funds to build).

As for Avery, she’s barely noticed any of the fame her playhouse has sparked. “Her teacher in kindergarten pointed it out before class started one day,” dad says. “Avery just sat there with no expression. She was almost embarrassed that she was getting so much attention!”

What’s in Avery and Violet’s playhouse?

Growing up is a beast! We've rounded up some lessons and activities to try with kids after watching Turning Red.
Read more
Advice