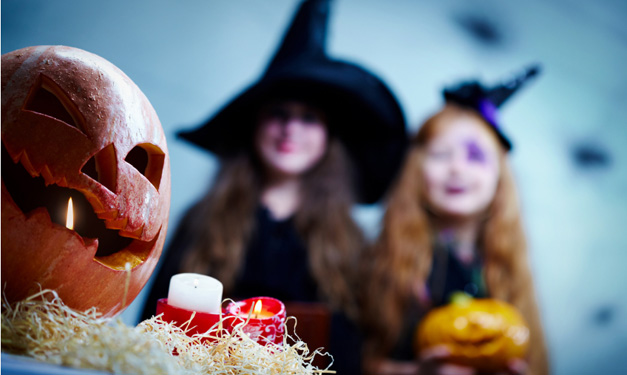 Wanna gross-up your family’s home this haunting season? Halloween just isn’t the same without some good old-fashioned bloodcurdling fun, after all. And metro Detroit area dad Tom Nardone, founder of ExtremePumpkins.com, has just what Dr. Frankenstein ordered when it comes to DIY creepy Halloween decorations that are fun for kids.

Here are five that are sure to make your kids shriek – with delight!

This is Nardone’s favorite tactic to scare the bejeezus out of unsuspecting trick-or-treaters (only one has ever cried, he proudly reports). Since his yard lacks the standard bushes to hide in (and leap from), he transformed a benign, rubber trashcan into a wicked clever costume. All it takes is can (with lid), a jigsaw, some rope and screws. Check out his illustrated guide for the how-to.

Whether splattered on a costume, creepy pumpkin or the bathroom mirror, this stuff’s a must when it comes to DIY creepy Halloween decorations. And, luckily, making your own isn’t rocket science. Try Nardone’s recipe:

Celebrate the undead with this wacky display, perfect for your family’s front yard (check out Nardone’s version).

In Extreme Halloween, Nardone creates a hideous looking – and totally edible – “Roasted Human Being” buffet out of loads of meat. He also makes it a bit healthier with a vegetable version. Arrange the following (raw, roasted, steamed or sauteed) into a human body onto a big plastic-cloth-covered table:

5. No costume? No problem

You already have the on-hand goods to whip up a last-minute homemade costume. Whether you’re scrambling for your own kids – or tossing a costume party and guests show up unadorned – Nardone suggests wrapping ’em in one of these homemade getups.

Try the classic toilet-paper mummy (use one whole roll!), cardboard-box robot (silver paint or aluminum foil are nice touches) or garbage-bag ballerina (use tape and scissors to create a bodice, poofy sleeves and, of course, tutu) on for size.

Give your teen a head start for financial success — and spark his or her interest, too — with these fun budgeting activities for high school students.
Read more
Private Schools

Considering single-gender education for your son or daughter at a southeast Michigan all-male or all-female school? These insights on the pros and cons of single gender schools may help.
Read more
Sponsored Content

The pronunciation doesn't matter — just know that the new variant is the most contagious COVID-19 strain so far.
Read more