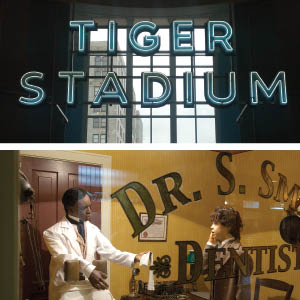 The Detroit Historical Museum is reopening after a major six-month renovation stint – and you and your family are welcome to explore all the new attractions starting on Nov. 23, 2012!

Second, Gallery of Innovation highlights great creators in the D you don't usually hear about – like James Vernor and the Feigenson Brothers (of Faygo fame). It'll even host an "Innovation Station" where you can create your own soft drink flavor!

And fourth, visit the Allesee Gallery of Culture for all things distinctively Detroit – like original neon from Tiger Stadium. It'll also remember icons like the 12th floor of the Hudson's building (where the toys were!), Ford's Model T and more.

Many favorite exhibits have received facelifts during the half-year effort, too. Watch for spruced-up details like the Underground Railroad Doorway to Freedom and throwback Streets of Old Detroit, which features replica cobblestone streets and 19th century storefronts.

Even the entrance is now an attraction: It's been transformed into the Detroit Legends Plaza, honoring the city's entertainment and sports icons. Legends like Gordie Howe and Martha Reeves have already cast their handprints and signatures in cement. (This is endeavor will take several years to totally complete).

Check out the Metro Parent listing to learn more about the 2012 Detroit History Museum Re-opening.