Dinosaurs: The Lost World at Cranbrook Institute of Science – VIDEO 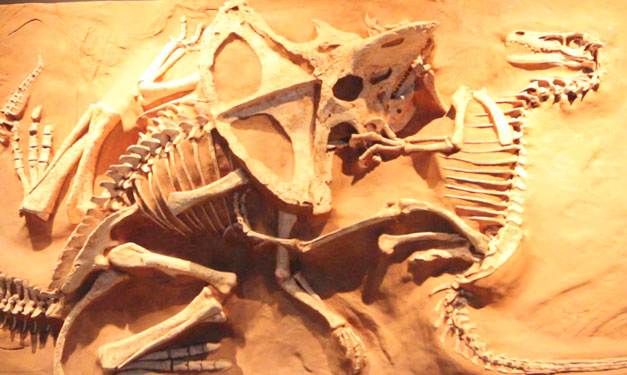 Giant, extinct reptiles and birds roar and soar once more during Dinosaurs: The Lost World, a special exhibit at the Cranbrook Institute of Science in Bloomfield Hills running from Friday, July 12, 2013, through Saturday, June 29, 2014. It's packed with dramatic images, impressive 3D skeletal mounts – and even a mini "excavation site" that lets kids dig up some dino finds of their own.

This exciting new exhibit rewinds about 99 million to 66 million years back to explore a vast array of dinosaurs, pterosaurs and marine reptiles that lived on what's now the west coast of the United States – plus way up into Alaska and down to Mexico! – during the late Cretaceous period. These animals enjoyed warm weather and lush vegetation.

There's so much to explore with your family. You'll get to meet 50-plus species of prehistoric creatures – many "newly described" that have "never displayed in Michigan," CIS notes on its website. There are also more than 60 complete skeleton casts, including a Volkswagen-sized turtle and ostrich-like Struthiomimus dino nicknamed "claws," and an impressive, 36-foot-long molded track featuring footprints of four types of dinosaurs.

Get a sneak peek of Dinosaurs: The Lost World in our video!

Watch for special events, as well, like "Dino Prep Lab" days, when you can help work on real dino fossils still in rock. Plus, check out a kids' area with excavation activities – and hands-on activities that let them experience how herbivores and carnivores saw and smelled their worlds very differently.

This original exhibit was developed by Cranbrook Institute of Science with John and Jack Hankla – who have an impressive private collection of dinosaur fossils.

Dinosaurs: The Lost World is yours to roam when you pay regular admission costs to visit the Cranbrook Institute of Science.

To learn more about Dinosaurs: The Lost World exhibit at Cranbrook Institute of Science in Bloomfield Hills, be sure to check out the Metro Parent calendar listing.