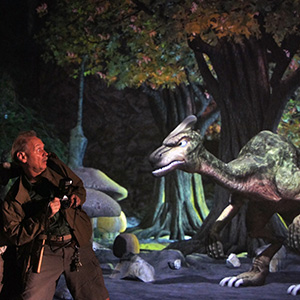 When the T. rex sneezes, you'd better stand clear! Your pint-sized paleontologists will definitely be blown away by this cool chance to get up close and personal with all their favorite dinos. It's all part of the family-friendly 4-D show Dinosaurus! hitting the stage of the Adray Auditorium on the main campus of Henry Ford College on weekends from Nov. 1 through 23, 2014.

Dinosaurus! follows the story of two oil explorers who stumble on a hidden colony of dinosaurs far below the ground. The duo disagrees on what to do with their big find. One wants to exploit the dinos, while the other wants to preserve their hideout and leave the creatures in peace.

Show-goers are seated onstage, surrounded by a physical set that matches the virtual set projected on the 20-by-60-foot 3-D projector screen (you get a pair of 3-D glasses to wear). The dinosaurs appear to be 20-feet-tall – and are complemented by several 4-D effects that really make the experience come to life.

The Virtual Theatricality Lab, which presents this show, is known for its creative use of advanced cinema technology, and several of its shows have won awards. Dinosaurus! is written by Edward Mast and Lenore Beninger and directed by Dr. George Popovich, a Henry Ford film and drama instructor.

Dinosaurus! takes the stage in Dearborn Fridays-Sundays, Nov. 1-23, 2014. Times are as follows:

Tickets are on sale through Henry Ford College. General admission is $8 for kids over age 12 and $5 for kids 12 and under. Only 80 people will be allowed at each show, so early purchase is advised.