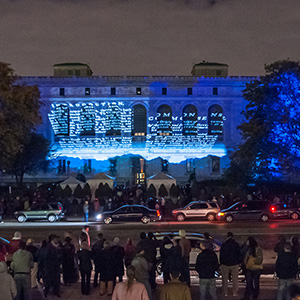 Midtown Detroit will be aglow with innovation during the DLECTRICITY art festival. The free two-night event, which is Sept. 26-27, 2014, merges art and architecture – where light, sound and performance come together in a re-imagining of the Woodward Corridor.

While this type of festival is newer to Detroit, similar versions have taken place around the world – and they are known as Nuit Blanche art festivals. Nuit Blanche means "all-nighter" or "white night" in French – and this particular weekend, Nuit Blanche festivals will be held in Paris and New York.

As the sun goes down, families can come see the city in a different light – and enjoy creative art projects and interactive exhibits like shadow puppet shows and arts-and-crafts stations. More than 35 installations will be showcased – including interactive design, animations and video– giving parents the chance to introduce their kids to different forms of art.

The big event will be a Saturday night "Light Bike Parade" at 8 p.m. Attendees are encouraged to adorn themselves – and their bikes – with illumination in creative ways. Pre-register and you can snag a light kit before the ride to jazz up your wheels.

Prizes will be awarded for the best display of lights in the parade – so be sure to amp it up and get noticed. It starts at Second Street and Warren Avenue, with other events and exhibits happening throughout Midtown.

See the Metro Parent listing for more on DLECTRICITY at the Midtown Detroit's Woodward Corridor.

One-third of U.S. children take nutritional supplements — but whether they need to is another question. Get yourself educated on children's vitamins.
Read more
At Home

Grab your blankets and basket of goodies for an outdoor meal and tons of fun at one of these top picnic spots in Macomb County.
Read more
At Home