Unleash your video gaming prowess on a wild game of wits in one of these live-action escape rooms in metro Detroit and beyond. 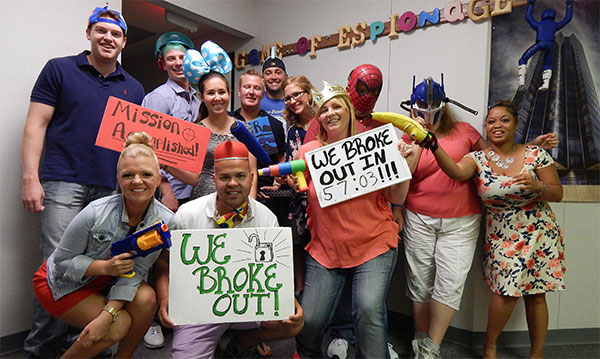 Are you a puzzle master who problem solves well under pressure? Then, escape rooms are the gaming outlets for you.

This live-action phenomenon was introduced to the U.S. in 2012, but the hype’s proven explosive, and now venues are peppered all over the mitten. How does this theatrical experience work? Players get locked in a room with friends, family or strangers and have (on average) 60 minutes to escape.

For many, this sounds like the ultimate nightmare. But these team-building exercises mesh scavenger hunting with investigative sleuthing to test gamers’ intellects and get your adrenaline pumping.

All venues suggest players arrive 15 minutes early for a briefing on the game’s objectives. Consult their websites to book rooms, times, prices and parties. But take note: At some spots, you can’t challenge the same room twice and tickets are typically nonrefundable.

While the rooms foster mystery, there’s nothing scary about the experience (except, perhaps, the room with the zombie). Most venues require adults to accompany youth younger than 18 (varies by location), because the problem solving is geared toward adult minds. No need to pump iron in preparation; the puzzles require only mental strength. So checkout one of these escape rooms in Ann Arbor, Detroit, Warren and more, and let the timer begin.

Nostalgic for the circus? Locked inside The Ringmaster’s Den, find the key before the timer reaches zero, or you’re doomed to stay as a permanent resident. Feel like snooping? You can also choose from Zombie Roadhouse (for ages 16-plus), where the onslaught of the undead has forced survivors to take refuge in an abandoned pub or the Chamber of Illusions, where you are transported into a mysterious realm where nothing is what it seems.

Bring an eager team and your wits in one of four rooms at this spot. In the first, you and your friends must find your way off of a deserted island. In the second, you’re tasked with saving Tony from a deadly snake bite. The third, you’re looking for a chocolate recipe in your grandpa’s candy shop and in the fourth, you must break an evil hag’s spell.

Fight for the win with your team on the Game Show or hunt for a serial killer in The Back Alley. There’s a nostalgic ’90s room and an attic, too.

Choose to tackle a top secret mission in The Agency, dive deep to unravel a mystery in The Dig or channel your 80s sleuth in the Stranger Things-inspired Rec. Room. But be quick! You have 60 minutes to gain your escape.

Choose from easy, moderate, hard and very hard rooms that include themes like The Bunker, Speakeasy, Illusionist, Cabin in the Woods, Pirates of the Sea and many others.

Offers a “Steampunk Gypsies” option for kids and adults ages 12-plus. And around Halloween, find the Vampire’s Lair for ages 14-plus. In the latter, expect one player to be blindfolded and the others handcuffed through a portion of the game. Someone must lay in a glass coffin, too.

Ready for an adventure? You can visit Kentsworth Sanitorium, find your way out of Alcatraz, escape from an airlock and more. Don’t miss new rooms making their debuts throughout the year at various locations.

If you like the Wild West, castles or always wanted to be a firefighter, check out the rooms at Ideal Escape such as ‘Quest for the Throne’ or ‘Firefighter Rescue’. There are five rooms offered here.

Return to Michigan Escape Games again and again with 10 live-action rooms at your disposal. Play the ultimate game of chess in CheckMate, solve a murder at bar Noir and more.

Puzzle gurus, unite! Get locked in a room with some of your favorite people, and assist your team with your expertise. The venue is regularly showcasing new rooms, but veterans’ favorites such as the Elevator and Kidnapped are always ready for a fresh batch of newbies.

This spot features four different rooms. Unravel a plot against the Prime Minister with Sherlock Holmes, find a missing pirate treasure chest, pull Excalibur from the stone at Merlin’s Castle and stop a missile from being launched.

This spot’s original room was built for the great Harry Houdini to attempt to escape. Tragically, he passed in Detroit before he could try the room. Now, local metro Detroiters can solve the puzzles and riddles that were built to specifically vex the master escape artist. A newer option, The Purple Gang, is just 25 minutes and pits you, a group of Detroit Police detectives, against the Chicago mob and Weirder Stuff simulates the original Fifth Wall Society investigation.

Choose from scavenger hunt rooms Sherlock Study and Moriarty’s Gameroom. They also have rooms that feature live performances and a “portable” option, too.

Think It Out Escape Rooms

Sleuth for puzzle pieces under pressure. Rooms offered include On the Radio, The Locker Room, Campout and Superhero U.

Looking for even more family fun? Check out the Metro Parent calendar for ideas.