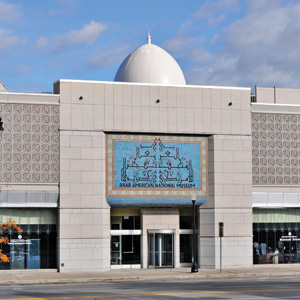 Metro Detroit has the highest concentration of Arab Americans in the country, according to 2010 U.S. Census data. With such a prevalent Arab American culture in our area, you and your family have likely encountered the many languages, tasted the rich and savory foods (hummus is a practically a staple in southeast Michigan) or seen the often hand-made apparel that this culture has to offer.

But you may not have had the chance to visit the Arab American National Museum in Dearborn, which offers exhibits, collections, events and resources that reflect the heritage.

It's the nation's only museum devoted to preserving and displaying Arab American history and culture, and the only Smithsonian affiliate in our region. And for April – which is National Arab American Heritage Month – this one-of-a-kind gem has more reasons to visit with special exhibits and events.

Special Exhibits and Events for April

Introduce your family to the artwork of 13 Arab American artists at this colorful, intriguing exhibit. Art pieces by Hanah Diab, Julienne Johnson, John Peters and Adnan Charara are among featured work. Don't miss out; this show is free with museum admission, which is $8 for adults, $ 4 for children ages 6-12 and free for ages 5 and under.

Let your little ones jump into the season at this soiree. Youngsters can take pictures with a clown, try a scavenger hunt through the exhibits, make Arab American-themed crafts or sing karaoke. To boot, pizza is served! Tickets are $6/pre-ordered online and $8/at the door. Adults can come for free, but can purchase a $2 food ticket.

This creative and cultural event gives your little ones a look at the intricate styles of Arab American art. Last year, kids crafted, ate hummus and participated in an interactive storybook experience discussing culture. This year, kids can make mosaic tiles, which are an artistic staple in Arab-world countries. It's free.

Whether it's National Arab American History month or not, if you're headed to the Arab American National Museum, there are a few must-see regular exhibits. Metro Parent got the scoop from the museum's educational and public programmer Janice Freij.

The ground floor and community courtyard of the AANM give visitors the opportunity to experience just about every aspect of Arab American culture. From architecture to music to art to monotheistic religions, your family can take it all in as they indulge their minds in what this culture has to offer. Free with museum admission.

Coming to America: Gallery One

This exhibit, located on the second floor of the AANM, gives families a glimpse of what life was like for Arab immigrants who made their way to United States, and how they've shaped the regions they settled in. This artifact-filled exhibit will give your little ones a first-hand look at how remnants of the first Arab immigrants still saturate our society today.

Take your family through the second floor of the AANM and check out how diverse early Arab immigrants were. See how different groups of Arab Americans made a living, and see how their influences have changed communities they worked and lived in. Free with museum admission.

Introduce your kids to influential Arab American individuals and organizations as you walk through this gallery, located on the second floor of the AANM. Get a look at impacts made by Arab Americans like activist Ralph Nader, journalist Helen Thomas and astronaut Christa McAuliffe, to name a few. Free with museum admission.