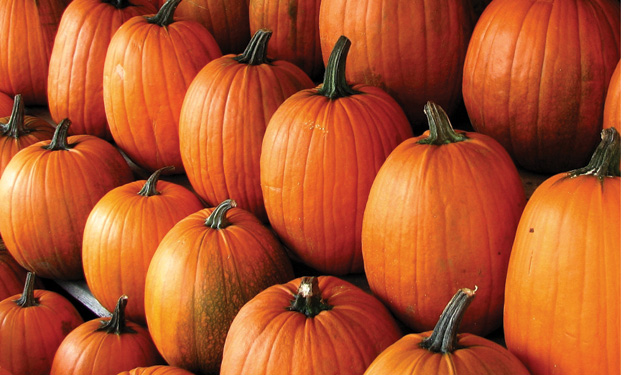 Look to the season to inspire your cool-weather baby’s birthday (or for a different spin on the season). The bounties of fall can turn any party into a celebration of autumn – particularly pumpkins, quite the versatile veggie. Read on for ideas to infuse the fun and flavor into your upcoming pumpkin patch party.

Fold a rectangle of orange construction paper in half and cut a half pumpkin on the fold, as you would a Valentine heart. Unfold and write out the details using a marker.

Pumpkin-seed toss. Number and line up five small baskets or crates. Have kids stand 3 feet in front of the first crate and toss seeds into the crates, in sequence. Small prizes can be given for each of the crates their seeds land in.

Pumpkin race. Set up starting and finish lines. Assign each attendee a round pumpkin, roughly the size of a soccer ball. Kids race to see who can get their veggie over the finish line first – using only their feet to slide the pumpkins along.

Ring the pumpkin. Line up three large pumpkins with long stems, to form a ring toss. Use embroidery hoops or make hoops with rope and duct tape. Mark a throwing line on the floor and take turns tossing the rings onto the pumpkin stems. Use stickers or small prizes for rewards (whether they make it or not). Or, have kids try to ring an entire large pumpkin with a hula-hoop.

Pumpkin-rolling contest. Divide children into two teams. Have a start line and turnaround line, 20 feet apart. Have the first child in each line roll a pumpkin from the start line, to the turnaround line, and back to the next person on their team. The first team to have everyone play wins!

Pumpkin decorating. Purchase small pumpkins and let each guest paint their own pumpkin (or use construction paper for younger kids).