Harlem Globetrotters Fans Rule at the Palace of Auburn Hills 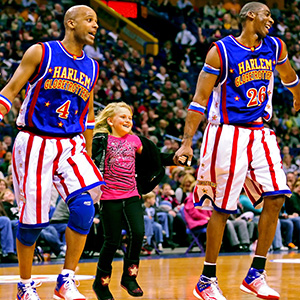 Since the 1920s, the Harlem Globetrotters have been taking basketball to a whole new level with stunts, comedy and skills that thrill audiences.

Now the world-famous basketball team is making its way to metro Detroit for its family show Fans Rule world tour at the Palace of Auburn Hills April 19, 2014.

At the "Fans Rule" game, attendees get to call the shots – literally. On the Globetrotters' website, fans can vote for a new rule they want to see at the game.

After the success of the game last year, they've introduced three new rules to the ballot, which could totally alter how the game turns out. The "Hot Hand Jersey" rule would allow both teams to have a special jersey to pass around. The player wearing that jersey gets double points on his baskets.

Or, vote for "Make or Miss." When the quarter begins, only two players from each team will be on the court. If a team scores, another teammate is allowed in the game. But if they miss, that player has to leave the game.

"Trick Shot Challenge" is also a new option. With three challenge flags per team, the coaches can challenge the opposite team to a trick shot. If they make the shot, they get a whopping five points. Miss it? The other team gets those five points.

Stick around once the game is over! Since the Globetrotters hang out after nearly all the games, you could get the chance to take photos with the players and get autographs.

The Jewish Festival of Lights runs Dec. 18-26, 2022. Celebrate it at one of these menorah lightings and Hanukkah happenings around town.
Read more
Sponsored Content