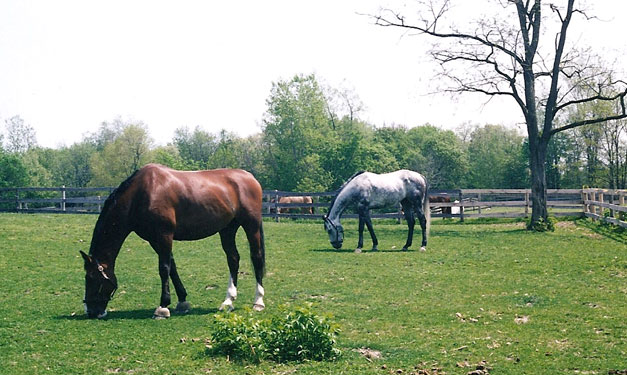 There's very little kids can't learn from a bit of time in the saddle. They've been getting that experience at Haverhill Farms in White Lake for decades now.

"Horses are big and strong," says Harry Klentner, founder of Michigan's "oldest and largest riding school" – who, at age 82, still runs this equestrian spot. From brushing and tacking to feeding these creatures, there's lots of responsibility.

"It teaches kids how to handle something bigger than they are."

That's a pretty apt analogy for life, wouldn't you say? "You will be able to get through," Klentner says, "whether that's in school, you might have a tough class, or anything."

Horses with a history

His school, set on 35 serene acres of rolling meadows and woods, has found a home in local family's hearts since it opened in 1950.

Horse riding is a quintessentially summer activity for many southeast Michigan kids. For Klentner, the bug also bit young, when he was an 8-year-old refugee from Austria.

"When Hitler came – I'm Jewish – we came to New York," he recalls. "We were poor. I had to work, so I worked at the Claremont Riding Academy."

At the historic Manhattan stable, which closed in 2007, Klentner got hooked. Simply put: "I liked animals. I liked horses. That's how it all got started."

An Air Force stint landed him at the Selfridge base in Mount Clemens. After his service ended, he and wife Kim founded the farm (they still live on the grounds).

"He follows directions very well," Klentner says of the beloved white horse with black spots. "He likes kids and he takes care of them." For the get-up-and-go set, there's chestnut mare Ariel, 7, and others peppier horses.

Group, semi-private and private classes offer unlimited flexibility. "That's the idea: You can take lessons any time, any day," Klentner says. "People have schedules, and we try to fit into their schedules."

Covering all skill levels, basic lessons run $25 an hour. Two-week camps, which kick off in mid-June (there are five two-week sessions), also are open to ages 6-16.

From jumping to dressage, advanced riders thrive here, too (those lessons run $30 an hour). Another 40 horses board at the farm, which also hosts horse training, leasing and shows. Birthday parties and Scout badge-earning programs are popular, as well.

What's changed over time? Not much, though smaller riders are on the rise.

"They seem to start earlier, as far as I can see," Klentner says – especially those 5-year-olds. "We have a lot mothers and daughters riding," too.

And the goal is steady as ever. "It's a relaxing place," Klentner says. "What I hope (kids) take away from it is confidence."