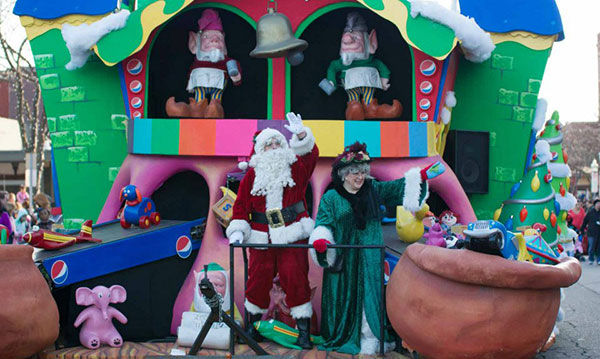 The parade includes more than 80 parade units to bring the holiday celebration starting at Lincoln and Washington avenues.

Presented by Genisys Credit Union, the Holiday Magic Parade includes floats from the Parade Company, circus performers, local organizations and marching bands. Also returning this year is Jay Towers from 100.3 WNIC, who will serve as the parade’s Grand Marshal.

Admission for the parade is free and it steps off at 2 p.m. Sunday. It continues until about 3 p.m.

Your family can give to those in need during the parade. New, unwrapped toys will be collected along the parade’s route or at the Main Stage. These toys will be donated to the Royal Oak Youth Assistance, a long-time community organization that aims to strengthen youth and families.

Looking to get in a little family fitness before the big event? Join the Oak Apple Santa Scamper. It’s an enjoyable, non-competitive event that invites people to run, walk or jog through the parade route at 1:30 p.m. before the parade begins. Get details here.

After the parade, stick around to see Santa and Mrs. Claus (3-5 p.m.) at the Skyward Real Estate, 519 S. Washington Ave., Royal Oak. They would love to see your children – and parents, be sure to bring your cameras. This is a memorable moment not worth forgetting! You’ll also find Santa’s reindeer until 4:30 p.m. at the Fifth Street walkway between Washington Avenue and Lafayette Street.

When the family starts to get hungry, stop in restaurants participating in Kids Eat Free, running Nov. 20-Dec. 18, 2016. Kids get a free meal when you buy an adult meal. Get all the details here.