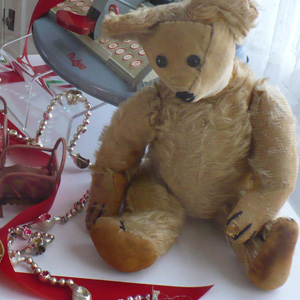 Fijit Friends and Let's Rock Elmo may be 2012's "hot" toys, but for parents and grandparents, the must-have playthings weren't quite so high tech. Want to show the kids what old school toys looked liked? Stop by the Birmingham Historical Museum for the Holiday Trains & Antique Toy Exhibit, open until Jan. 7, 2012.

Toys from the 19th century all the way through the 1960s are on display, giving you the chance to tell kids about your favorite toys – from the teddy bear to the Raggedy Ann doll to Madame Alexander dolls of first ladies Jacqueline Kennedy and Eleanor Roosevelt.

Farm trucks, trailers, construction vehicles and more make up the newest addition to the exhibit – the Tonka Truck collection, which is on loan from Stuart Sherman, Birmingham's city commissioner. He has quite the extensive collection of 1950s and '60s trucks!

Don't forget about the trains. Nineteenth-century Birmingham is the backdrop for the three-steam locomotive display. Back then, trains acted as way to transport and connect people, and the railroad was an integral part of the Birmingham community. So, the museum decided to incorporate the history into this year's theme – "Birmingham in the 19th Century."

People of all ages are welcome to check out the exhibit. The museum is open from 1 to 4 p.m. Wednesdays through Saturdays. Admission is $5/adults, $3/seniors and students and free/ages 5 and under.

See the Metro Parent listing for more on the Holiday Trains & Antique Toys Exhibit at the Birmingham Historical Museum.