'It's a Wonderful Life' at the Encore Theatre 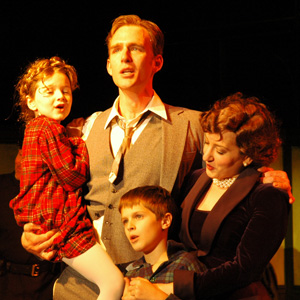 The '40s film It's a Wonderful Life starring James Stewart gets a musical makeover in the Encore Musical Theatre's production of It’s a Wonderful Life, performed Thursdays through Sundays from Nov. 17 to Dec 23.

The musical adaptation, written specifically for The Encore Theatre, premiered in 2010.

Since last year, scenes and musical numbers have been added. Some of the cast members from last year's production will reunite for this show, which will include 30 performances.

While there is one show on Nov. 17, the official opening night is Nov. 18. People who attend the Nov. 18 show are welcome to enjoy the Opening Night After Glow with the cast and crew. Snack on hors d'oeuvres or have a drink (it's a cash bar).

Tickets for the show are $28 for adults and $25 for kids ages 17 and under. Last year's performances sold out, so be sure to get your tickets now.

See the Metro Parent listing for more on It's a Wonderful Life at the Encore Musical Theatre Company.