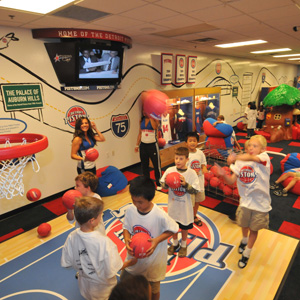 Take your kids on a tour of Detroit with a playful twist at the Live, Learn and Play Center at Detroit Children's Museum. Opened in fall of 2011, this fun new "exhibit," which is a permanent addition to the museum, lets families learn a little more about the metro Detroit area.

Highlighting some of the city's memorable spots, the center lets kids climb into a toddler tree house that represents the parks of Detroit, scamper through a crawl space to cross from Detroit to Canada and tour the Detroit skyline – all the way to the Palace of Auburn Hills and more! And the Palace Hall of Fame, funded by our own Detroit Pistons and PNC Bank, lets kids shoot some hoops on the Pistons-themed basketball court.

The center is located inside the Detroit Children's Museum and is open 9 a.m.-4 p.m. Wednesday-Friday and 10 a.m.-4 p.m. Saturday. Starting in December, hours will be extended to include Tuesday admission. The center is free with museum admission: $5/adults and $3/child, which includes a planetarium show and access to the rest of the Detroit Children's Museum.

See the Metro Parent listing for more information on the Live, Learn & Play Center at the Detroit Children's Museum.