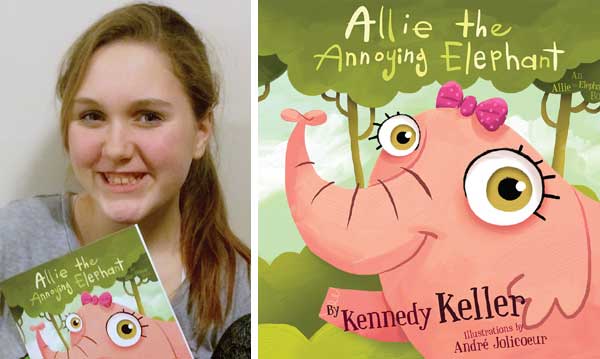 Be true to yourself. And give tons of shout-outs in the acknowledgements! Those two things sparked Lake Orion fourth-grader Kennedy Keller’s first picture book.

Her dad, Joe Keller, played a role too. An IT pro and newly minted author himself, he chatted about his book in Kennedy’s class. That’s when she learned her name was listed in the credits. “I said, ‘Oh, that’s so cool! I wanna write a book now so I can put a bunch of people in there,” Kennedy laughs. The 11-year-old got to work.

The result, Allie the Annoying Elephant, features a boisterous pink elephant who loves laughing and telling wacky jokes. But this seems to annoy potential pals. Ultimately, this fun-loving little lady finds a true friend who lets her be herself.

Art definitely imitates life. “I based all of the other characters off of my teacher and my friends,” she says. Leaf the Giraffe is one. Joe explains, “He likes to eat leaves. That was based off her fourth-grade teacher who was tall and used to eat salad for lunch!” And Kennedy’s personality is similar to Allie’s.

“I get my corny jokes from my dad and I get my confidence and courage from my mom!” Kennedy, who also loves gymnastics and the outdoors, is doing elementary school readings too. She hopes her book gives kids a positive message.

Find something funky to see this year at these weird roadside attractions in Michigan.
Read more
At Home