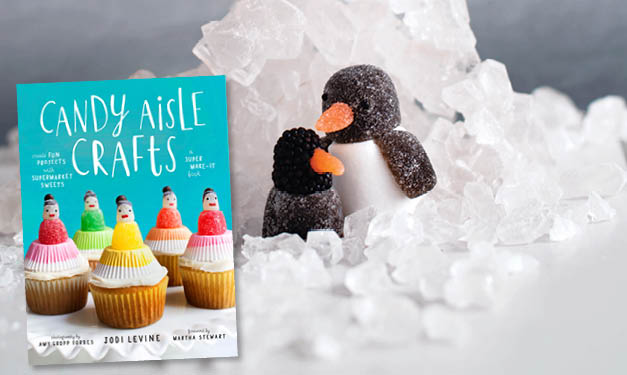 Candy is bright, fun and colorful on its own. But when you fire up the oven or simply bust out the kitchen scissors, it can take on new and improved life as batches of animals, creative cakes and super creative holiday inventions.

That's the idea behind Candy Aisle Crafts: Create Fun Projects with Supermarket Sweets, published by Potter Craft, a division of Penguin Random House, LLC. It's the brainchild of writer/crafter Jodi Levine, a Brooklyn mom of two young boys. Her sweet tooth for turning goodies into buoyantly colorful, totally edible projects is addictive – whether it's melting peppermints into festive "tree pops" or snipping gumdrops for a "gummy animal menorah." Her projects span themes and celebrations, all beautifully photographed by Amy Gropp Forbes.

But whatever creation you decide to tackle, it's sure to be fun and easy for kids to join in on (with mom or dad manning the oven, of course!). The publisher was nice enough to share one of the creations with Metro Parent – a mama and baby penguin snuggled up alongside a pile of "rock candy ice." This one only requires some candy and scissors. So hit your favorite local grocery store and get crafting!

Note: Instructions are reprinted with permission from the publisher.

Planning your family fun for the month? We've got you covered with the best upcoming events in Macomb, Oakland, Wayne and Washtenaw counties.
Read more
Travel